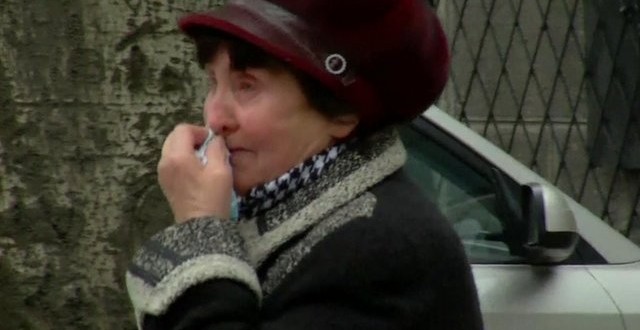 Tom Burridge reports from the mine entrance where relatives have gathered

A suspected gas blast at a coal mine in a rebel-held region of eastern Ukraine has killed 33 people and trapped around 30, a rebel official told BBC News.

At least 14 miners were also injured at the Zasyadko mine, which saw Ukraine’s worst mine disaster nearly eight years ago when 101 were killed.

Anxious relatives of miners have gathered at the scene to await news.

There are fears the rebels lack the resources to deal with the disaster, the BBC’s Tom Burridge reports.

Donetsk saw heavy fighting between separatist rebels and government troops over the winter but a mine union official, Mikhail Volynets, told a Ukrainian TV channel there had been no fighting in the area in recent days.

While Ukraine’s economy has significantly shrunk since the conflict began in April, many coal mines continue to operate in the conflict zone.

Before the conflict, accidents were common in the mines, where safety standards are poor.

18 November 2007: 101 miners killed after a methane explosion at Zasyadko Mine, Donetsk

11 March 2000: 80 killed after a methane explosion at Barakova Mine, Luhansk region

Confusion surrounded the death toll in the hours after the blast, which occurred at 05:20 (03:20 GMT).

In the Ukrainian parliament in Kiev, speaker Volodymyr Hroisman announced that 32 people had been killed and called for a minute’s silence.

However, he later retracted the figure, saying instead that one person was dead and the fate of 32 others was unknown.

Anxious families of miners gathered at Zasyadko for news

Emergency vehicles stood outside the mine

Other miners arrived at Zasyadko to help in the rescue effort

It is known that, at the time of the blast, 230 people were in the shaft.

Of these, 157 had been brought out by 09:00 local time, leaving 73 unaccounted for before reports of the deaths, both rebel and official sources said.

The sister of one miner who was in the pit at the time of the explosion, Alexei Novoselsky, stood at the entrance to the mine, in tears, Reuters reports.

“Tell me, are there survivors?” she asked a passing rescue worker. “Why are you concealing the truth?”

A welder at the mine, who gave his name as Oleg, said: “I’ve been down the pit for 23 years, and this is the fourth explosion that I can recall.

“If they didn’t get them out straight away, then later they will only retrieve bodies. An explosion is a terrible thing.”

The mine is one of Ukraine’s biggest coal producers.

Are you in the area? How have you been affected by the incident? Contact us here [email protected].