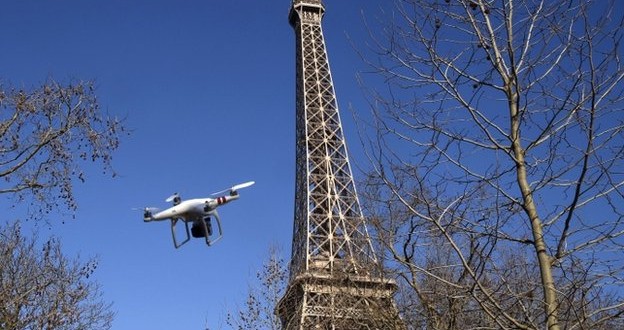 There was a spate of drone sightings last week, many of them in the centre of Paris

Ten more drones have been spotted flying over Paris and reports say police are searching for four men after a chase in the east of the city.

The latest drones were seen hovering near the Eiffel Tower and several other areas further away from the centre.

Some 60 drones have been sighted since October, over nuclear installations and central Paris, the government says.

The most recent have all been over Paris, prompting security fears after the murders of 17 people last month.

Security at key sites in Paris was tightened last month after the killings by Islamist gunmen at Charlie Hebdo magazine, in Montrouge and a kosher supermarket.

Flying drones over the capital is banned without a licence and no night flights are allowed over the city at all. The heightened security presence was thought to be one of the reasons why the unmanned aerial vehicles were spotted.

There was a sighting in January over the Elysee Palace, home of President Francois Hollande, and last week near the US embassy.

Police sources told French media that the latest drones appeared at around 22:00 (21:00 GMT) on Tuesday.

One of the machines was spotted by police on patrol close to Porte de Montreuil, on the edge of the city, French news channel BFM-TV reports.

They chased the drone in their car but lost track of it because of traffic.

The report suggested that the drone had been recovered by four men further south at Porte de Vincennes but they fled in a black car on the nearby Paris ring road.

The authorities have been unable to establish who is behind the drones.

The incidents above nuclear plants in the autumn were blamed on environmental activists, but no-one has admitted involvement in the latest incidents.

On Tuesday, an Al-Jazeera journalist, Tristan Redman, was fined €1,000 (£725;$1,120) for flying a drone in the Bois de Boulogne park on the west side of the city last week, but that was not considered related to the case.