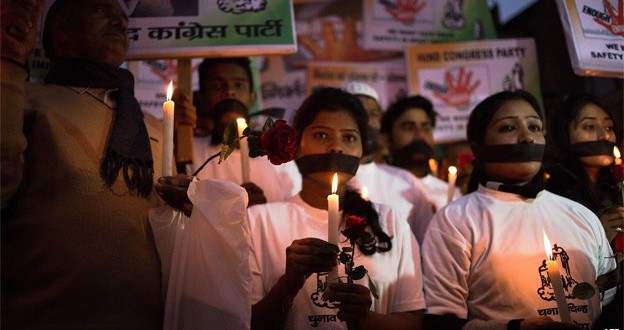 The rape led to mass protests and vigils in Delhi

Indian Home Minister Rajnath Singh has promised an inquiry into how a TV crew gained permission to interview one of the Delhi gang rapists on death row.

He criticised the film in parliament, saying it should not be shown in India. A Delhi court has already blocked the film, made for the BBC and NDTV.

Film-maker Leslee Udwin said the jail and home ministry had given her permission to conduct the interview.

She spoke to one of four men sentenced to death over the 2012 rape and murder.

Udwin interviewed one of the rapists for India’s Daughter, a BBC Storyville documentary which was due to be broadcast on 8 March, International Women’s Day. It is now being shown in the UK on Wednesday night.

Rapist Mukesh Singh, who along with the three others is facing the death penalty, expressed no remorse in the interview, and blamed the victim for fighting back.

One woman was asked whether she feels safe in India: ”No, I do not feel safe at all”

Rajnath Singh told parliament that his government would “not allow any venture that seeks to benefit from this [the Delhi rape] for commercial gain”.

He said the film-makers were asked not to release or screen it until it was approved by the Indian authorities.

Police in Delhi said they had gained an injunction against the film because the rapist’s remarks were “creating an atmosphere of fear and tension”.

In addition, media organisations were apparently barred from publishing quotes from the film, or broadcasting any clips.

The BBC’s South Asia correspondent Justin Rowlatt in Delhi says the issue is not just what the convict says, but also whether he should have been given a platform to express his views.

The film-makers have said any attempt to stop the film’s broadcast would be a violation of the right to freedom of expression. They plan to challenge the ban in court.

Businesswoman Anu Agha, a member of the upper house, told parliament that “banning the documentary is not the answer”.

“What the rapist said is the view of many men in India. Let us not pretend all is well,” she said.

Javed Akhtar, a writer who is also a member of the upper house, said it was “good that this film was made [and that] it will reveal how many men think like [the] rapist”.

Along with three of the other attackers, Mukesh Singh is appealing against his death sentence.

While prosecutors say the men took turns to drive the bus, and all took part in the rape, he says he stayed at the wheel throughout. His brother Ram Singh was also convicted but died in prison before the trial.

A teenager found guilty of rape and murder in the case was sentenced to three years in a juvenile reform facility.

A BBC spokesperson said: “This harrowing documentary, made with the full support and co-operation of the victim’s parents, provides a revealing insight into a horrific crime that sent shock waves around the world and led to protests across India demanding changes in attitudes towards women.

“The film handles the issue responsibly and we are confident the programme fully complies with our editorial guidelines.

“Assassin Films, the production company that made India’s Daughter, has assured the BBC that it fully complied with the filming permissions granted by Tihar Jail.”

India’s Daughter will be broadcast on Storyville on BBC Four on Wednesday 4 March at 22:00 GMT.