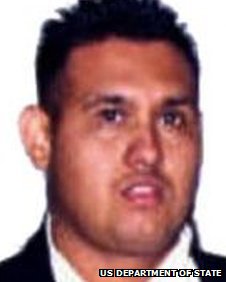 Omar Trevino Morales is wanted in the US and Mexico

Omar Trevino Morales, leader of the notorious Zetas drugs cartel in Mexico, has been captured by security forces.

He was arrested in the early hours of Wednesday in the city of Monterrey in the northern state of Nuevo Leon, police said.

He is believed to have run the Zetas cartel since the capture of his brother, Miguel Angel, in 2013.

Servando Gomez was the leader of the Knights Templar cartel in Michoacan state.

Omar Trevino Morales, known as Z-42 and believed to be 40 or 41 years old, is wanted in the US and Mexico on charges of drug trafficking, kidnap and murder.

Mexican media, citing officials, said he had been seized in the Monterrey suburb of San Pedro Garza Garcia in a joint operation by the army and the federal police.

He was arrested in a luxury home without a shot being fired, local media said.

Neighbours told El Universal newspaper the house had been bought about half a year ago by a family “which kept themselves to themselves and did not mingle with other neighbours”.

He is being transferred under heavy security to Mexico City, reports said.

The Zetas were created in the 1990s as the enforcement arm of another powerful criminal gang, the Gulf Cartel.

They were made up of defectors from an elite military unit and quickly became known for their brutality.

When they split from their former Gulf cartel allies, a violent turf war ensued.

Decapitations and dangling of bodies from motorway bridges became a particular trade mark of the gang, which sought to intimidate its rivals by using particularly gruesome tactics.

Among the notorious crimes attributed to the cartel are the 2011 arson attack on a Monterrey casino in which 52 people died and the torture and murder in 2010 of 72 Central American migrants as punishment for their refusal to act as drugs mules.

The cartel was weakened by the killing of former leader Heriberto Lazcano in 2012 and the capture of Miguel Angel Trevino Morales in 2013.

But according to analysts from the US-based think tank Stratfor, it had recently been expanding its territory again.

The cartel is most active in the north-eastern states on the border with the United States, including Coahuila, Tamaulipas and Nuevo Leon.

With the Gulf cartel losing ground, the Zetas are believed to have had less need for violence and instead concentrated more on extortion and drug trafficking.

Servando Gomez’s arrest less than a week ago was also made without a shot being fired.

He was then paraded before television cameras before being flown by helicopter to a maximum security prison.

President Enrique Pena Nieto wrote on Twitter that the rule of law had been strengthened by the arrest.