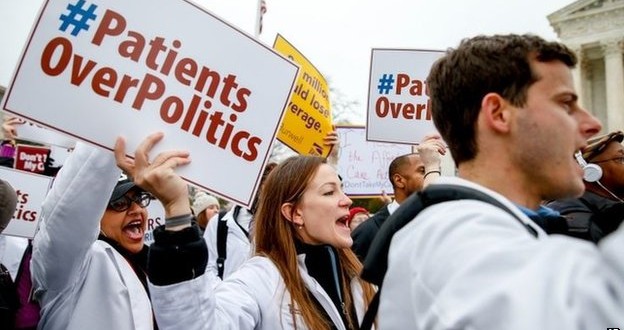 Medical students rally outside the Supreme Court on Wednesday

The US Supreme Court is hearing arguments over a healthcare law challenge that could threaten health insurance for eight million Americans.

The challenge rests on the distinction between federal and state-run insurance marketplaces set up as part of President Obama’s 2010 law.

The high court previously upheld a separate element of the law in 2012.

But many of its provisions have begun since then and an estimated 9.5 million people are enrolled in the programme.

In King v Burwell, the justices are being asked to determine whether the wording of the law makes people in all 50 states eligible for federal tax subsidies that make insurance premiums more affordable.

The 2010 law, often known as Obamacare, set up a federally-run insurance exchange where Americans who were not covered by employers or other governmental could buy health insurance.

Individual states also set up exchanges, but most states declined to do so. Residents in thirty-four states would be affected by the decision.

Challengers at the court say five words of the law – “exchanges run by the state” – means only those covered by state-run exchanges are eligible for federal subsidies.

The Obama administration argues this is a too-narrow reading of the law, which spans near 1,000 pages, and the rest of the legislation makes clear subsidies are intended for those who meet income requirements, regardless of which exchange insurance was purchased from.

During arguments on Wednesday, Justice Anthony Kennedy, who often provides the deciding vote in close cases, said he saw a “serious constitutional problem” with plaintiffs’ argument.

Justice Kennedy said removing subsidies would unlawfully pressure states but said the law’s challengers may win based on the plain text reading.

Independent studies by the Urban Institute and the Rand Corporation estimate eight million people would lose insurance if the court rules for the plaintiffs.

On Wednesday, protesters, both in support and in opposition to the law, rallied outside the court.

“You shouldn’t have to choose between a roof over your head or healthcare – or do I go to the doctor today, or do I make sure my kids can eat something today?” one protester, Michelle Boyle, a nurse from Pittsburgh, Pennsylvania, said.

Republicans and conservatives see the law as an government overreach.

Marsha Blackburn, a Republican congresswoman from Tennessee, told the gathering that she was confident the court would rule against the subsidies in the law.