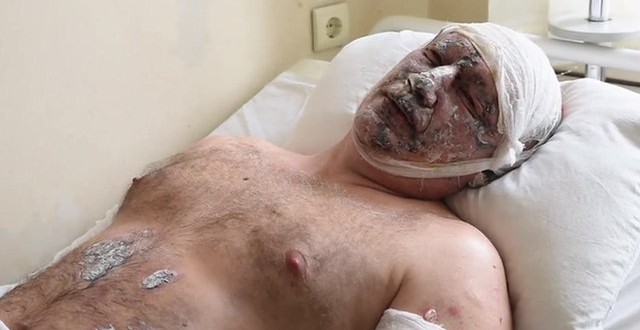 Dozens feared dead in Ukraine mine

Injured miner: “When I came to, there was dust everywhere”

A suspected methane gas blast at a mine in a rebel-held area of east Ukraine is believed to have killed at least 30 people, the rebels told the BBC.

They only confirmed 23 deaths at the Zasyadko coal mine. Ukraine’s officials say as many as 33 people may have died.

There are fears the rebels lack the resources to deal with the disaster, the BBC’s Tom Burridge reports.

Zasyadko was the scene of Ukraine’s worst mine disaster nearly eight years ago, when 101 people were killed.

Ukrainian President Petro Poroshenko has demanded access to the mine for government rescuers and police.

The mine is close to a front line where the pro-Russian rebels have been battling Ukrainian government troops.

However, Ukraine’s mine unions head Mykhailo Volynets told a Ukrainian TV channel there had been no fighting in the area in recent days.

While Ukraine’s economy has significantly shrunk since fighting began in April, many coal mines continue to operate in the conflict zone.

Mining safety standards are poor, and there are frequent accidents.

Why Ukraine’s mines are so dangerous – Explained in 90 seconds

18 November 2007: 101 miners killed after a methane explosion at Zasyadko Mine, Donetsk

11 March 2000: 80 killed after a methane explosion at Barakova Mine, Luhansk region

In the Ukrainian parliament in Kiev, speaker Volodymyr Hroisman announced that 32 people had been killed and called for a minute’s silence.

However, he later retracted the figure, saying instead that one person was dead and the fate of about 30 others was unknown.

Anxious families of miners gathered at Zasyadko for news

Emergency vehicles stood outside the mine

A number of miners managed to escape unhurt after the blast

But the Ukraine-controlled Donetsk regional administration said later on Wednesday that 33 people died, and nine bodies had already been recovered.

It is known that, at the time of the blast, 230 people were in the shaft. About 200 have now been accounted for.

The sister of one miner who was in the pit at the time of the explosion, Alexei Novoselsky, stood at the entrance to the mine, in tears, Reuters reports.

“Tell me, are there survivors?” she asked a passing rescue worker. “Why are you concealing the truth?”

A welder at the mine, who gave his name as Oleg, said: “I’ve been down the pit for 23 years, and this is the fourth explosion that I can recall.

“If they didn’t get them out straight away, then later they will only retrieve bodies. An explosion is a terrible thing.”

The mine is one of Ukraine’s biggest coal producers.

At the end of last year, the mine was reportedly still supplying coal to coke and chemical works owned by Ukraine’s wealthiest businessman, Rinat Akhmetov, in Donetsk region.

In the old coal-mining area of Donbas, the Zasyadko mine is one of the newest. It started operations in 1958 and is now said to be part-owned by Yukhym Zvyahilsky, a local leader with money and influence who was once an acting prime minister of Ukraine and is now an MP.

The mine is also one of the most dangerous. It is deep and it has particularly hazardous levels of methane. The year 2007 was particularly bad. It saw three accidents, the worst of which claimed the lives of 101 miners.

In normal circumstances Ukraine has an established rescue procedure. There are many skilled local rescuers helped by teams that are brought in quickly from other parts of Ukraine. But these are not normal times.

The war in eastern Ukraine caused a lot of material damage to infrastructure, power supply and road links across the Donbas. It also ruptured the existing links with central authorities. It is unlikely that the rebels will talk to Kiev and allow the rescue teams in but will they turn to Russia for help?

Whatever the death toll of this accident, it adds to the depressing statistics in this part of Ukraine where the UN has reported more than 6,000 people killed by the conflict that is tearing it apart.

Are you in the area? How have you been affected by the incident? Contact us here [email protected].