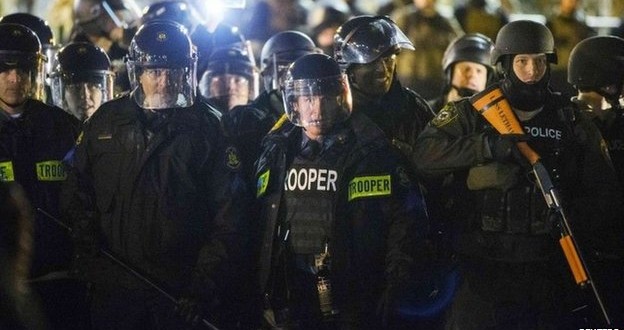 US Attorney General Eric Holder says leaders in Ferguson, Missouri, must take “immediate, wholesale” action after a report of widespread racial bias in its law enforcement.

In what Mr Holder himself called a “searing” report, the justice department found a “disturbing and unconstitutional” pattern of abuse.

The inquiry began after the shooting death of Michael Brown, 18, by police.

His death sparked nationwide protests over police treatment of minorities.

A Missouri grand jury also declined to charge him with murder in November.

“Michael Brown’s death, though a tragedy, did not involve prosecutable conduct on the part of Officer Wilson,” Mr Holder said in a statement at the justice department.

Black people are disproportionately stopped by police, even allowing for their greater numbers in the city

Mr Holder acknowledged the result of the investigation into Mr Wilson did not match up with expectations, and that was in part because of what the wider investigation found about the Ferguson police department and courts.

He described Ferguson as a community where officials used law enforcement to generate revenue and did so disproportionately against African-Americans because of racial bias.

“Amid a highly toxic environment, defined by mistrust and resentment, stoked by years of bad feelings, and spurred by illegal and misguided practices – it is not difficult to imagine how a single tragic incident set off the city of Ferguson like a powder keg,” Mr Holder said.

“In a sense, members of the community may not have been responding only to a single isolated confrontation, but also to a pervasive, corrosive, and deeply unfortunate lack of trust.”

Mr Holder identifies several of the worst abuses found in the report, including a man arrested at gunpoint after he objected to a police officer accusing him of being a paedophile without probable cause. The man lost his job because of the arrest, the attorney general said.

Some of those protesters were right”

The report also found black residents were disproportionately subject to baseless traffic stops and citations for infractions as petty as walking down the middle of the street.

The justice department also outlined their findings of explicit racial bias in the ranks – including emails that depicted President Obama has a chimpanzee, as well as many offensive stereotypes about black Americans.

The report noted public officials regularly made tickets and other minor violations “go away” for for white friends while some black residents spent nights in jail for non-payment of tickets.

Although some community perceptions around the death of Michael Brown may not have been accurate, Mr Holder said, “the climate that created them was all too real”. He added: “Some of those protesters were right.”

A memorial sits in the spot where Michael Brown was killed

Mr Holder said that while the problems found in the report in Ferguson were “acute” they were “not confined to any one city, state, or geographic region”.

The city of Ferguson is expected to respond to the report in the near future.

Similar federal investigations have led to overhauls in police practices but the justice department maintains the right to sue a police department if officials do not make changes.

“It’s quite evident that change is coming down the pike. This is encouraging,” said John Gaskin III, a St Louis community activist on Wednesday.

“It’s so unfortunate that Michael Brown had to be killed. But in spite of that, I feel justice is coming.”