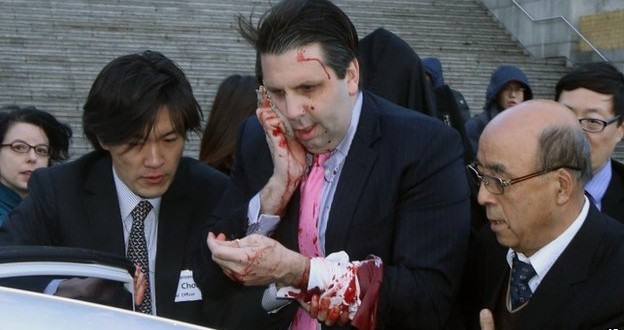 US envoy to S Korea in knife attack

The US ambassador to South Korea, Mark Lippert, has been injured by a knife-wielding attacker in Seoul.

Mr Lippert, 42, was attending a breakfast meeting when he was slashed on his face and left hand.

He was taken to hospital but his injuries are not life-threatening.

Witnesses said the attacker, a 55-year-old man with a history of militant Korean nationalistic activism, shouted demands for North and South Korea to be reunified.

He was subdued by security officers and arrested.

South Korean President Park Guen-hye said the incident was an “attack on the South Korea-US alliance”. The US State Department strongly condemned the incident.

US President Barack Obama had called Mr Lippert to wish him “the very best for a speedy recovery”, US National Security Council spokeswoman Bernadette Meehan said.

The attack happened at about 07:40 (22:40 GMT Wednesday), when the ambassador was at a performing arts centre in central Seoul, South Korean police were quoted as saying by the Yonhap news agency.

The attacker was arrested by security officers in central Seoul

The assailant reportedly shouted “South and North Korea should be reunified!” before lashing out at the envoy.

The attacker also expressed opposition to annual military exercises held jointly by South Korea and the US, which are currently under way.

North Korea has described the exercises – which involve more than 200,000 troops – as a rehearsal for an invasion and has vowed retaliation.

However, there is no evidence that the attacker was an agent of North Korea, the BBC’s Stephen Evans in Seoul reports.

A small group of South Koreans believe that the American military presence prevents unification of the two Koreas.

The assailant had previously thrown concrete at the Japanese ambassador to South Korea. He also has a record of militant Korean nationalistic activism, said our correspondent.

Mr Lippert – a former US assistant secretary of defence – was appointed ambassador to South Korea in 2014.

His wife gave birth in the country, and the couple gave their son a Korean middle name, according to the Associated Press news agency.