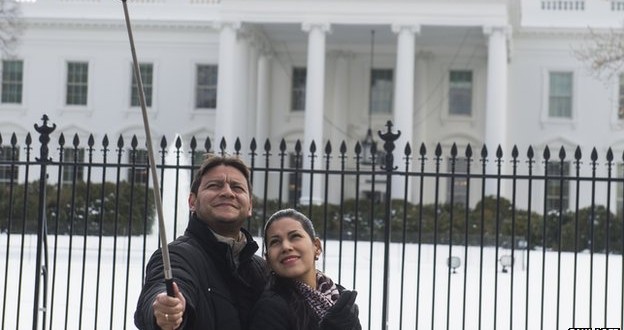 They’re becoming a must-have for tourists but the selfie stick will not be welcome at Washington’s top museums.

The Smithsonian, the largest research and museum group in the world, has banned the fashionable photography aid.

“This is a preventive measure to protect visitors and objects, especially during crowded conditions,” it said in a statement.

The selfie stick allows you a longer reach when using a smartphone or camera to take a picture of yourself.

It first gained popularity in Asia but has lately been condemned by some as annoying when brandished in public.

“We encourage museum visitors to take selfies and share their experiences and leave the selfie sticks in their bags,” the Smithsonian said.

The new rule – not inspired by any one incident but designed to be preventative – is the first change in years to the Smithsonian’s rules.

“I can’t think of any recent change that’s been similar to this,” spokesman John Gibbons said.

“I don’t think 10 years ago that you could have predicted there would even be such a thing, let alone that it would be so popular.”

The backlash against selfie sticks

The Smithsonian consists of 19 museums and galleries in the US capital, the National Zoological Park and nine research centres. It had more than 28 million visits last year.

The institution, which already prohibits tripods, monopods and large backpacks in its buildings, is not alone in saying no to the new selfie accessory.

Similar restrictions on the tourist item have been enforced at museums and galleries in the US in recent months including New York’s Metropolitan Museum of Art and Modern Museum of Art (MOMA), the Getty Center in Los Angeles and the Cleveland Museum of Art.

Major galleries in Australia have introduced a ban also. And they have been banished from major European football games and music venues such as the O2 and Wembley Arena.

Most European art institutions, however, have not taken action – the Louvre in Paris and London’s Tate Museums still permit them. They can also be seen at New York’s Museum of Natural History.