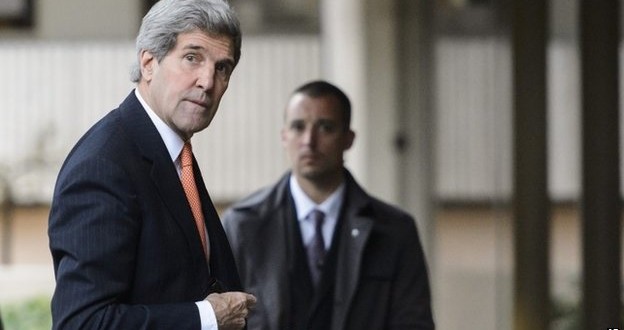 US Secretary of State John Kerry is meeting Gulf leaders in Riyadh on Wednesday to address concerns over a nuclear deal with Iran.

The visit comes after Israeli Prime Minister Benjamin Netanyahu strongly warned against such a deal in a speech before the US Congress on Tuesday.

A framework agreement with Iran is meant to be in place by 31 March.

The new Saudi monarch, King Salman, an important ally of the US, hosted President Obama in January

The Sunni-ruled Gulf states are concerned about Tehran’s suspected ambitions to acquire nuclear weapons and its growing influence in the region.

Mr Kerry, who flew to Riyadh after another round of nuclear talks with his Iranian counterpart Mohammad Javad Zarif in Switzerland, will reassure them that a deal with Iran will not allow Tehran to develop nuclear weapons, US officials say.

Mr Netanyahu used his speech before the US Congress to deliver a strong warning against what he called a “bad deal”. He described Iran as not trustworthy and a danger to the world, not just Israel.

Negotiations with Iran as they were, he said, were not preventing, but paving the way for Tehran to acquire nuclear weapons.

US President Barack Obama said the speech, which Mr Netanyahu gave after being invited by Republican leaders without White House consultation, contained nothing new and offered “no viable alternative“.

Together with the other permanent members of the UN Security Council and Germany, the US is trying to negotiate a deal with Tehran that offers the lifting of sanctions in return for Iran curbing its nuclear ambitions.

Iran insists its nuclear programme is for energy purposes only and says it is not trying to develop weapons-grade uranium.

Beyond the nuclear talks with Iran, the US would continue to confront “Iranian expansion” and “aggressiveness,” a senior US official said in a reference to Iran’s growing influence in the region, a concern highlighted by Mr Netanyahu and shared by the Gulf countries.

Mr Kerry would reiterate US support for efforts at mediation in Yemen, the official said, and he is also expected to address the situation in Syria and the fight against Islamic State militants.