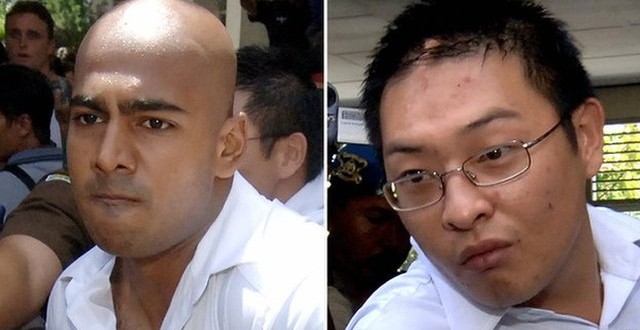 The Bali Nine ringleaders – the essential background in one minute

Indonesia has rejected a last-ditch offer from Australia of a prisoner swap aimed at saving the lives of two Australian men on death row.

Foreign Ministry spokesman Arrmanatha Nasir told the BBC that Indonesia had no law to provide for such an exchange.

Andrew Chan and Myuran Sukumara, from the ‘Bali Nine’ drug-smuggling group, are due to be executed within days.

The men are due to be shot by firing squad.

A spokesman for Indonesia’s attorney general said the execution date may be decided in a few days.

Ms Bishop had announced the offer to repatriate three Indonesian convicts in return for the two Australian men in a joint news conference with Prime Minister Tony Abbott.

“What we are seeking to do is have an opportunity to talk about options that might be available in the area of prisoner transfer or prisoner swap,” she said.

The offer was made to Ms Bishop’s Indonesian counterpart Retno Marsudi, who “undertook to provide that information to the president”, Ms Bishop said.

The Australian government was exploring “every avenue that might be available to save the lives of these two men”, she added.

Mr Abbott said that he was seeking another telephone call with Indonesian President Joko Widodo to attempt to persuade him to show the men mercy.

Mr Abbott and Ms Bishop were joined on Thursday morning by MPs and members of the public for a candlelit vigil for the men outside the parliament building in Canberra.

The BBC’s Karishma Vaswani reports: The pair are at the centre of a ”diplomatic clash” between Indonesia and Australia

Chan and Sukumaran were convicted in 2005 after being caught attempting to smuggle heroin from Bali to Australia.

President Joko Widodo has said the drugs trade destroys lives in Indonesia and has adopted a hard line on convicted dealers.

Chan and Sukumaran left Kerobokan jail in Bali early on Wednesday morning and were flown to Nusakambangan, the high-security prison island where Indonesia conducts executions.

The date of their execution has not been announced but was expected to be this week. Al-Jazeera’s Indonesia correspondent Step Vaessen said on Wednesday Mr Widodo told her the execution would not happen this week.

The men are scheduled to be executed alongside citizens from countries including France, Brazil, Ghana and Nigeria. A woman from the Philippines also facing execution has appealed for a judicial review.

Although it is not clear when the executions will take place, the authorities must legally give the convicts 72 hours’ notice.

Chan and Sukumaran’s relatives and supporters have pleaded for their lives to be spared, arguing that they have been rehabilitated while in jail.

Indonesia’s Nusakambangan prison, where the executions are due to take place

If the executions go ahead, it would be the second group of drug offenders to be put to death since Mr Widodo came to power.

In January, Indonesia executed six people, five of whom were foreigners, for drug offences.