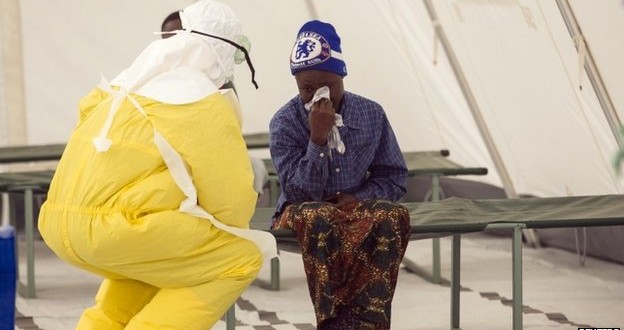 Liberia ‘Ebola-free’ for one week

Some communities are still resisting pleas to bring infected family members to treatment centres, the WHO says

Liberia has gone a week without reporting any new cases of Ebola, the first time such a milestone has been reached since May 2014, the World Health Organization says.

But officials say there have been 132 new cases in Guinea and Sierra Leone in the week to 1 March.

They have warned that populations are so mobile in the area that there could easily be fresh outbreaks in Liberia.

Nearly 10,000 people have died from Ebola, most in these three countries.

Ebola is still far from eradicated in Sierra Leone

“We look at the three countries as really a single country, so while it’s good news that Liberia itself has no new cases, the populations are so mobile in that region that there could easily be re-importations of cases,” said WHO spokesman Gregory Hartl.

“We have to get down to zero in all three countries before we can consider this thing beaten.”

Medics are now getting ready to discharge the country’s last confirmed Ebola patient in the Liberian capital Monrovia.

The country has to have no new cases for 42 days to be declared Ebola-free.

In their latest assessment of the epidemic, WHO officials also warned that disease surveillance “may not be optimal” in Liberia because of the low number of samples.

They say that some communities are still resisting pleas to bring infected family members to treatment centres.

Only half of the 51 new infections in Guinea came from registered contacts of Ebola patients, the WHO says, and some cases are only identified after post-mortems are conducted.

Ebola is still far from eradicated in Sierra Leone, which recorded 81 new cases, including 26 in the capital Freetown.

“The number of confirmed Ebola virus disease deaths occurring in the community in Guinea and Sierra Leone remains high, suggesting that the need for early isolation and treatment is not yet understood, accepted or acted upon,” the WHO statement said.

“Unsafe burials continue to occur, with 16 reports of unsafe burials in both Guinea and Sierra Leone, respectively,” it said.

Liberian President Ellen Johnson Sirleaf on Tuesday called for a “Marshall Plan” for the Ebola-affected countries of West Africa.

She was referring to the massive US aid programme for Europe launched after World War Two.