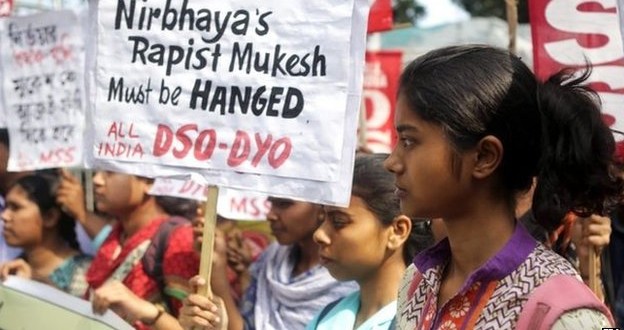 Some activists say the rapists should have fast-track executions

India’s home minister has threatened action against the BBC, after it aired a film in the UK featuring an interview with an Indian rapist on death row.

Rajnath Singh said he would investigate whether “norms have been violated”.

Analysts say it is unclear what action he could take as the BBC did not show the film in India, where it is banned.

The BBC Storyville film features an interview with a man facing the death penalty over the 2012 rape and murder of a student on a bus in Delhi.

Mukesh Singh is one of four men sentenced to death for the incident, which caused shock and revulsion around the world.

In the interview he appears to show no remorse, and instead suggests the victim might have survived if she had not fought back.

Although the film has not been shown in India, some activists were angry that he was interviewed at all.

Others were supportive and said the film should be shown to help spark the debate on rape in Indian society.

The film was due to be shown on Sunday on the BBC and the Indian channel NDTV.

But the authorities banned its broadcast in India.

The BBC brought forward its airing of the documentary and showed it on UK channel BBC Four on Wednesday night.

“We had asked to not release the documentary, but BBC still released it,” the home minister told NDTV.

“We will investigate and the [Ministry of Home Affairs] will take action accordingly.”

The BBC had earlier defended its decision to move forward its broadcast, saying it would “enable viewers to see this incredibly powerful documentary at the earliest opportunity”.

The corporation said the documentary “handles the issue responsibly and we are confident the programme fully complies with our editorial guidelines”.

One woman was asked whether she feels safe in India: ”No, I do not feel safe at all”

The family of the student who was raped and killed have also given their backing to the documentary.

Her father described the film as “the bitter truth” and said everyone should watch it.

“If a man can speak like that in jail, imagine what he would say if he was walking free,” he told NDTV.

Speaking to the BBC, Leslee Udwin, who made the documentary, described the reaction of the Indian authorities as misguided.

“I went out there not to point a finger at India – the opposite, to put it on a pedestal, to say not in my life have I seen another country go out with that fortitude and courage the way the Indian nation did,” she said.

“Unfortunately what this ill-advised decision to ban the film is now going to do is have the whole world point fingers at India.”

Although the BBC has only broadcast the documentary in the UK, versions of it uploaded by YouTube users have been widely shared in India.

YouTube said in a statement that it had complied with a request to take down a page hosting the documentary, but users quickly posted other links to versions of the film.

The BBC said the independent production company that made the film is currently taking steps to remove illegal uploads.