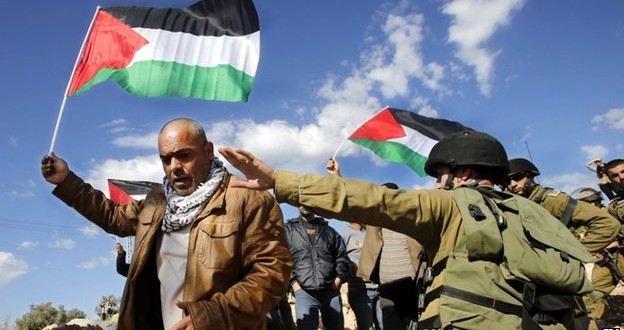 The Palestine Liberation Organisation (PLO) has decided to end a security co-operation agreement with Israel which dates back to the Oslo Accords of 1993.

The PLO is the representative body for Palestinians and its decisions are binding for the Palestinian Authority.

In practice this means ending intelligence sharing on militant groups such as Hamas.

This decision is a sign of the worsening relationship between Israel and the Palestinian Authority.

On Thursday The PLO said its executive committee would meet to implement the decision taken at the central council’s meeting in the West Bank town of Ramallah.

Observers say the announcement is being seen as a retaliatory move after Israel cut off tax transfers, a key source of funds for the Palestinian Authority.

Israel suspended tax transfers after the Authority’s decision to join the International Criminal Court (ICC) in January. The tax freeze has left the government unable to pay thousands of government employees.

Palestinian sources say that the decision is final and that it is not a way of pressuring Israel into releasing the tax.

Israel has yet to respond to the decision.

The always fractious relationship between Israel and the Palestinians has worsened sharply in the months since the last conflict in Gaza.

The suspension of security co-operation is the Palestinian’s strongest card in this relationship.

Hamas has always complained bitterly that under the deal the Palestinian Authority has ended up administering Israeli Occupation.

If the arrangement does suddenly end it will be a blow to Israeli security and one to which it would be expected to respond strongly, although it’s not clear how this decision will be implemented

The announcement may be a strategy designed to pressure Israel into resuming the payment of desperately-needed tax transfers but Palestinian sources say it is final.

Whatever the case, it is certainly a sign of a relationship heading dangerously from bad to worse.