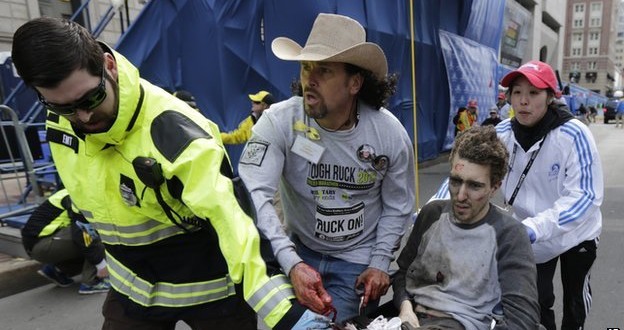 Jeff Bauman was severely injured during the Boston Marathon bombings

A man who lost his legs in the Boston Marathon bombings has testified that he locked eyes with one of the bombers just before the attack.

In the second day of the trial of Dzhokhar Tsarnaev, Jeff Bauman said he met the gaze of the bomber’s older brother, who was not watching the race.

Mr Tsarnaev is on trial for the April 2013 attack and could face the death penalty.

The elder brother, Tamerlan, died in a shootout with police.

“He was alone. He wasn’t watching the race,” Mr Bauman, who now has to use prosthetic legs, said. “I looked at him, and he just kind of looked down at me. I just thought it was odd.”

The testimony comes on the second day of the trial of the younger brother, which opened Tuesday with the surprise admission from the defence that Mr Tsarnaev participated in the attacks.

Mr Tsarnaev is charged with 30 counts related to the bombings, which left three dead and wounded more than 260 people.

Several other witnesses took to the stand to offer testimony on Thursday.

With an artificial limb clearly visible below her skirt, Roseann Sdoia said she saw two flashes of white light and then realised she no longer had a leg.

Prosecutors showed the jury a gruesome photo of her mangled leg.

“Someone came running over to me and told me I had to get out of there. I told them I couldn’t get up. I didn’t have a leg,” Ms Sdoia said between sobs.

Jurors also heard from one of the emergency responders who detailed efforts to save a university student’s life and the decisions that officials had to make in the aftermath of the bombing.

Lu was placed in an ambulance, but was almost immediately removed when a paramedic determined “she was gone” and chose to save the ambulance space for someone who could be helped.

Before the witnesses spoke, defence lawyers complained that testimony from the previous day was too graphic and requested that it be limited.

The trial will be split into two parts. This first phase is to determine his guilt or innocence. If convicted, a second phase will determine the punishment, and the jury will have to decide whether he will be put to death.

The entire trial is expected to last three to four months.

Tamerlan Tsarnaev died a few days after the bombing in a gun battle with police as the two brothers fled.