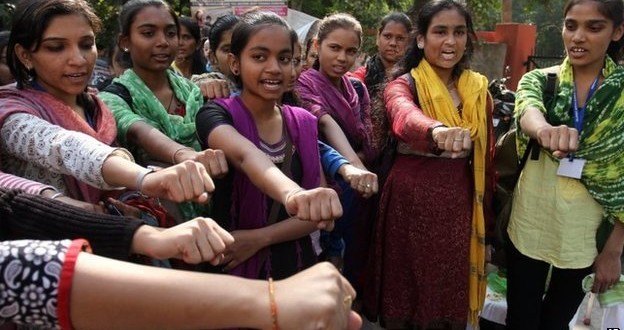 A British film-maker has defended an interview with a convicted Indian rapist, hours after authorities there launched a slew of legal measures.

Leslee Udwin denies claims that she broke a contract with the prison by airing the interview with the rapist, convicted over the 2012 Delhi bus rape.

She said India’s legal actions, including a request for a global ban, had no legal or practical basis.

The film has been banned in India, but the BBC showed it in the UK.

In the interview, rapist Mukesh Singh, who is facing the death penalty, shows no remorse.

The 23-year-old student, who died days after the attack in December 2012, was repeatedly beaten and gang-raped while being driven around Delhi in a bus.

In the interview, Singh suggested she might have survived if she had not fought back.

Earlier in the week a Delhi court issued an injunction against the film after police argued the interview contained offensive remarks towards women, and could cause a public outcry.

Home Minister Rajnath Singh has since promised an inquiry into how access was gained to the prison, and threatened unspecified action against the BBC for airing the film.

Tihar Jail, which allowed the interview, has alleged that Udwin broke an agreement by not allowing officials to vet her footage.

But Udwin has insisted that she followed all the correct procedures.

“I wrote an impassioned letter to the director general of prisons. She granted her in principle permission,” Udwin told the BBC.

Udwin earlier told a news conference she had given the prison all 16 hours of footage from her interview, but officials watched only three hours before telling her there was too much material.

She then submitted a shorter version, which was approved.

She added that she was confident the decision to ban the film would be overturned in Delhi’s High Court.

The documentary, India’s Daughter, was due to be shown on the BBC and NDTV on Sunday.

While NDTV has been forced to shelve its broadcast, the BBC changed its schedules and aired the documentary on Wednesday night.

The director general of Tihar Jail said officials had issued a “legal notice” to the BBC on Wednesday requesting that it did not show the film, even in the UK.

The notice apparently came from Rakesh Singh, an official in the ministry of information.

The BBC’s director of television, Danny Cohen, replied to Mr Singh, saying: “We do not feel the film as currently edited could ever be construed as derogatory to women or an affront to their dignity.

“Indeed, it highlights the challenges women in India face today.”

He added: “We are not planning to transmit the film in any territory which lies under Indian legal jurisdiction.”

Some activists have criticised the film and accused the film-maker of giving a platform to the rapist.

But the father of the victim described the film as “the bitter truth” and said everyone should watch it.

“If a man can speak like that in jail, imagine what he would say if he was walking free,” he told NDTV.