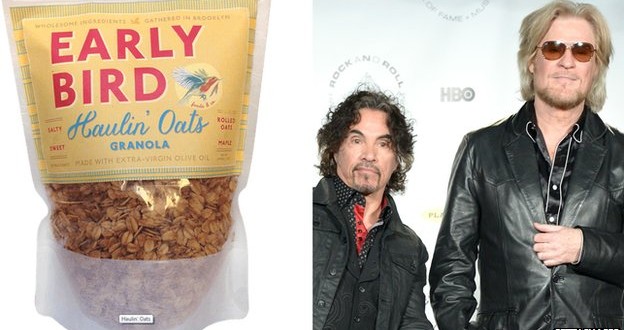 Lawyers for the singers filed the case in Brooklyn federal court.

The duo claim the company is attempting “to trade off of the fame and notoriety associated with the artist’s and plaintiff’s well-known marks”.

Haulin’ Oats is a nut-free cereal made from maple syrup and oats, described by its makers as a “back-to-basics flavour… perfect by itself or as the base for a breakfast parfait creation”.

The case notes that various parties have attempted over the years “to make a connection between the artists’ names and oats-related products”.

Hall and Oates started working together in the early 1970s, and have become one of the most successful duos in pop history.

Whole Oats is the name of the singers’ corporate company and their first album.

Their hits include Maneater, Rich Girl, Private Eyes, I Can’t Go for That (No Can Do), Sara Smile and She’s Gone.

Earlier this week, they postponed a concert at the Warner Theatre in Washington DC “due to Daryl Hall having laryngitis caused by a severe cold and flu”, according to a statement on their official website.

The concert has been rescheduled to 29 April.