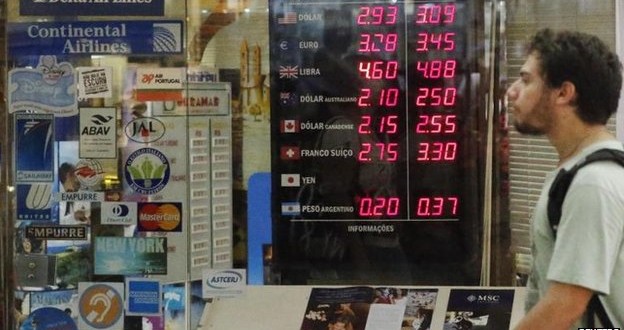 Brazil’s real has been falling against other currencies

Brazil’s central bank has lifted interest rates to a six-year high of 12.75% to restrain inflation.

Inflation in Brazil, Latin America’s largest economy, was at a 12-year high in February of 7.4%. The government’s target is 6.5%.

Brazil’s economy had been one of the world’s fastest growing, but looks to have stalled in 2014.

Economists are now predicting that the economy will contract by more than 0.5% this year.

In a statement, Brazil’s central bank said: “In assessing the macroeconomic scenario and the outlook for inflation, the Copom [the bank’s monetary policy committee] decided unanimously to raise the rate by 0.5 percentage points, to 12.75%.”

Brazil, once one of the fast-growing Bric economies that also include Russia, India and China, is struggling as demand for its commodities slows.

The country’s president, Dilma Rousseff, is trying to force through measures to cut the country’s deficit by cutting spending and raising taxes, but is facing stiff political opposition.

An attempt to increase taxes was rejected by the president of Brazil’s Senate.

On top of that, a corruption scandal at the state-owned oil giant Petrobras is adding to uncertainty and curbing the company’s investment plans.

Brazil’s move to raise rates goes against the global trend for rate cutting. This week, India cut interest rates and China has also been easing monetary policy to try to boost economic growth.

Brazil’s currency, the real, fell by 2% on Wednesday, touching an 11-year low at one point.