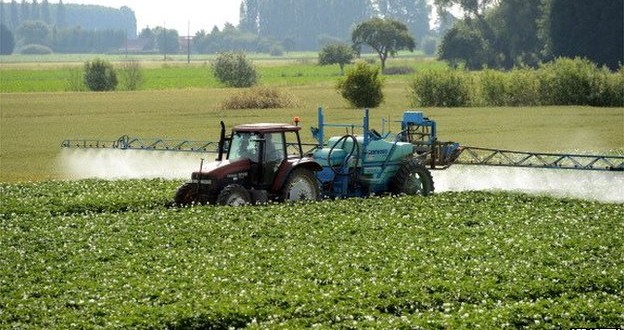 Pesticides can block and mimic the function of human hormones

Common chemicals that disrupt human hormones could be costing more than €150bn ($165.4bn; £108.5bn) a year in damage to human health in Europe, a series of studies claims.

The data suggests the high economic impact of chemicals in pesticides, plastics and flame retardants.

The team, led by New York University, said the estimates were conservative.

However, experts cautioned the findings were “informed speculation” and called for more detailed research.

The data was presented at the annual meeting of the Endocrinology Society.

Endocrine-disrupting chemicals (EDCs) can be physically similar to the hormones that naturally control our body’s physiology so mimic their function. They can also block the function of hormones.

They have been linked with declining sperm counts, some cancers, impaired intelligence, obesity and diabetes. The main concern surrounds their impact during early development.

The authors of the study argued that limiting exposure would have significant benefits.

In the EU, one of the most famous disrupting chemicals, bisphenol A (BPA), has been banned in baby bottles and children’s toys.

Yet the European Commission says the relationship between EDCs is not clear and has called for more detailed studies.

Many of the conditions linked to EDCs are also influenced by a wide range of other environmental influences. And some scientists contest the levels in the environment are not high enough to influence health.

Some questioned whether BPA, found in babies’ bottles, was that harmful

The international research team acknowledge “there is uncertainty” and adapted techniques used by the International Panel on Climate Change to balance the uncertainty with the potential scale of the impact.

This included healthcare costs as well as lost economic potential.

Their calculations said it was more than 99% certain that at least one of the chemicals was indeed having an impact on health.

Dr Leonardo Trasande, a paediatrician at the New York University school of medicine, told the BBC: “These results suggest that regulating endocrine disrupting chemicals could produce substantial economic benefit that would be less than the cost of implementing safer alternatives and produce net economic benefits.

“Clearly we need further research, but there is a greater than 99% probability that these chemicals contribute to disease.”

The overwhelming majority of the reported costs were from “lost cognitive potential”. The studies claimed around 13m IQ points were being lost across Europe and 59,300 cases of intellectual disability could be attributed to EDCs.

The main concern over EDCs is how they affect early development

The studies looked at less than 5% of suspected EDCs and did not look at conditions such as cancer and female reproductive diseases. Hence the scientific team argue that these are conservative estimates.

Prof Richard Sharpe, from the UK Medical Research Council’s Human Reproductive Sciences Unit based in Edinburgh, told the BBC he agreed with the authors that more research was needed in this area.

But he cautioned: “Most of the content of these publications is interpretation and informed speculation and none of us should lose sight of this.

“What worries me about this approach is that whilst this may help to focus attention on the need for further research to clarify the huge number of uncertainties in these areas, these highly presumptive estimations inevitably become viewed and presented as being far more solid than they actually are.”