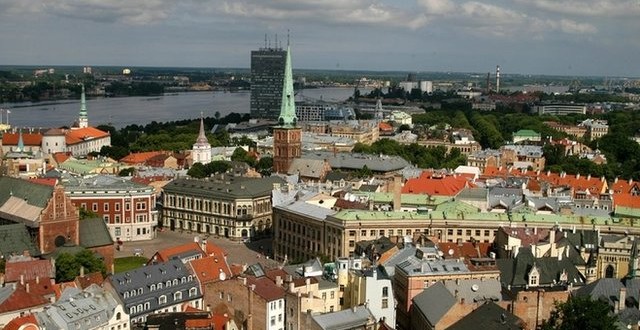 Why are the Baltic states worried about the challenge from Russia?

The EU’s foreign policy chief has called for international efforts to make a fragile ceasefire for eastern Ukraine stick.

Speaking ahead of a meeting of EU foreign ministers, Federica Mogherini insisted implementation of the Minsk peace deal was “the way forward”.

This comes after senior figures in the US Congress called for Washington to send lethal defence weapons to Ukraine.

The Ukraine crisis is set to dominate the two-day talks in Riga, Latvia.

Ms Mogherini admitted the ceasefire agreed in Minsk last month was “not perfect”, but described the overall outlook as “positive”.

“What Ukraine needs now is not only the full respect of its sovereignty, of its territorial integrity, but it is also peace,” she said.

“And we have to work, all together on these two dimensions.”

US President Barack Obama is said to be studying the option of sending weapons to government forces in Ukraine, but this would put him at odds with some European leaders, notably German Chancellor Angela Merkel.

US Deputy Secretary of State Antony Blinken told German radio on Friday that if aggression from pro-Russian separatists continued, the need to help the Kiev authorities “protect themselves” would only increase.

“We also know that if we were to supply more defence technology, Russia could easily counter that by providing two, three or four times what we do,” he told DLF.

The EU meeting in the Latvian capital comes amid heightened tension over Ukraine.

Latvia and its Baltic neighbours Estonia and Lithuania have voiced concern about what they see as Russia’s increasingly aggressive attitude.

Here inside the multi-million pound Latvian national Library complex, the 28 EU foreign ministers are meeting for an event that’s been long on the agenda.

Now with unfolding events in Ukraine, and allegations of Russian attempts to destabilise the Baltic states, the focus and urgency of these talks has been sharpened.

Latvian and Lithuanian ministers have told me that their immediate concern is what they perceive to be “Russia’s information war” – anti-EU television and media propaganda that they claim is targeting the minority Russian speakers in the Baltic states.

The Lithuanian Foreign Minister, Linos Linkevics, says he’ll be using the summit to call on other EU members to address ways to counter the perceived threat.

The ministers of all three Baltic states say they believe the EU should be moving faster to respond to Russia’s unpredictable President Vladimir Putin.

They fear Nato and the EU have moved too slowly to counter Russia’s actions.

Nato has increased its military presence in the Baltic states, with several military drills and training exercises in Lithuania in recent weeks.

Correspondents say it is a deliberate show of force and an act of unity against an alleged threat from Russia to the former Soviet states.

On Thursday Russia announced large-scale military exercises in the annexed Crimea, as well as breakaway regions of Georgia.

At least 6,000 people are believed to have been killed since the conflict in Ukraine’s eastern Donetsk and Luhansk regions erupted last April, a month after Russia annexed Ukraine’s southern Crimea peninsula.

During a briefing of the UN Security Council, the head of humanitarian aid operations, John Ging, said the number of people in eastern Ukraine without access to basic necessities was “staggering”.

Meanwhile German Foreign Minister Frank-Walter Steinmeier and Russia’s Sergei Lavrov called for the number of international monitors working for the OSCE security group in the conflict area to be increased to 1,000, according to Russia’s foreign ministry.

OSCE officials said in February the number of monitors in eastern Ukraine would be increased to 350.

Ukraine and Western leaders say there is clear evidence that Russia is helping the rebels with weapons and soldiers – something Moscow denies.

Independent experts echo the accusation, but Russia insists that any Russians serving with the rebels are “volunteers”.