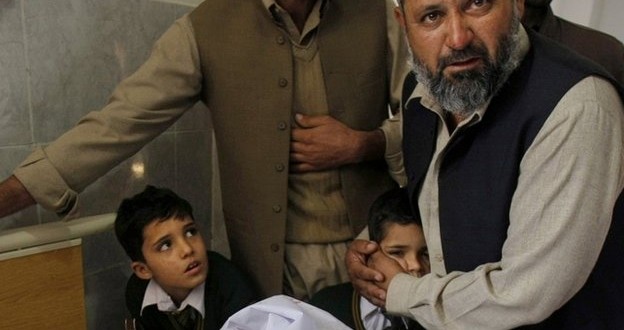 The Peshawar attack horrified Pakistan, and led to ramped up security in schools

Pakistani authorities have renamed 107 schools after the victims of last year’s massacre at a Peshawar school.

More than 60 schools in Peshawar are among the institutions now bearing the names of victims of the attack.

Most relatives approved of the gesture, but one parent told the BBC he had not been contacted.

Taliban gunmen killed more than 150 pupils and teachers at the school on 16 December. Since then authorities have promised to crack down on militants.

Teachers have been given firearms training and are now able to carry weapons in class.

Vigils were held all around Pakistan after the attack

The Khyber-Pakhtunkhwa provincial government announced they would rename the schools late on Thursday.

Mushtaq Ghani told the BBC it was meant as a memorial to the victims, but also as a message to the militants that they cannot stop education.

“These children, teachers and other staff died because they wanted education, which the terrorists don’t want them to have,” he said.

At the same time, the central government said it would confer the highest civil award for bravery on all of the victims.

Salman Ahmed, whose son Aamish Salman was killed in the attack, told the BBC he did not know if his son had been included on the list.

“We heard that the government planned to name schools after the martyred children, but no-one contacted us,” he said.

“This is not going to bring back our children, but there’s no harm either.”

Mr Ghani said the government intended to contact all of the victims’ relatives and name a school in their honour.

Khalid Khan says a school in his village in Peshawar’s southern suburbs has been named after his son.

“I went to this school as a child, Daud’s cousins go to this school, so I feel proud that it now bears Daud’s name,” he told the BBC.

Tufail Khattak, whose son Sher Shah was killed in the attack, told the Express Tribune the move meant that “the martyred children will be remembered forever”.

The BBC’s M Ilyas Khan in Islamabad says the move is meant partly to pacify some parents who are still angry that they have not been told what security lapses led to the massacre, and whether any officials have been held responsible.