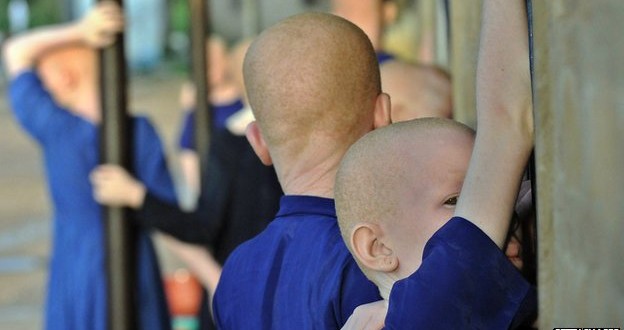 Albinism affects around one in every 1,400 Tanzanians

Tanzanian police have arrested 32 witchdoctors in the north-western Geita region as part of efforts to halt the killings of albinos.

On Thursday, four people were sentenced to death for the 2008 murder of an albino woman in the same area.

The government outlawed witchdoctors in January as part of a campaign to halt the killings.

Geita police chief Joseph Konyo told the BBC that “the witch doctors were arrested in possession of different items, including potions and oil from an unknown source”.

He did not say whether they had been charged, or caught with anything relating to albinos. Albinism is a condition that affects the production of skin pigment.

A few weeks ago the body of a murdered one-year-old boy was found with his limbs hacked off in the same region.

Campaigners say at least 70 albinos have been murdered since 2000.

On Thursday, the High Court sentenced four people to death for the 2008 killing of Zawadi Mangidu, 22, in Geita. Her husband was one of those convicted.

It is unclear if the sentences will be carried out due to a moratorium on the death penalty in Tanzania.

Tanzanian President Jakaya Kikwete has vowed vowed to stamp out a practice that he calls an “ongoing evil” which brings shame on the country.

The government outlawed witchdoctors in January, following concerns by analysts that this year’s general elections would spark a surge in violence against albinos as candidates seek a competitive edge.

Albinism is particularly prevalent in Tanzania with one in 1,400 estimated to be affected, according to a 2006 report. This compares with one in 20,000 in Western countries.

Some researchers believe the higher rate is due to inbreeding.