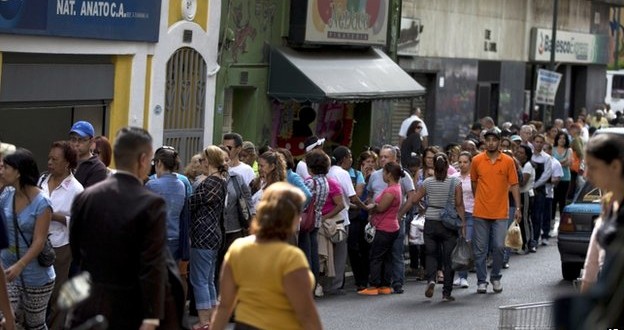 Neighbours to give Venezuela food

The government says many queues are “artificially created” by unscrupulous businessmen

Foreign ministers from 12 South American nations gathering in Caracas have promised to help Venezuela overcome an ongoing shortage of food, medicine and other products.

The regional Unasur bloc agreed with President Nicolas Maduro to provide items that have gone missing from many Venezuelan supermarkets.

The shortage of staples has contributed to popular discontent.

“The idea is to get all the countries to support the distribution of staples,” said Ernesto Samper, Secretary-General of Unasur (Union of South American Nations).

“We will work together with the Venezuelan authorities to strengthen the distribution networks in our countries so they help Venezuela,” said Mr Samper.

He criticised recent anti-government protests in Venezuela that descended into violence.

The opposition must “express its opinions in a democratic, peaceful and lawful manner,” said Mr Samper.

The Unasur ministers will meet opposition leaders and government officials in the next few days to seek guarantees that Venezuela will be able to hold free and fair elections later this year.

Anti-government protesters have been calling for President Maduro to resign

Opposition leader Henrique Capriles told the AFP news agency on Tuesday that Mr Maduro could cancel the vote, which is scheduled for the second half of this year.

“The government had never had such a large deficit [in the polls] heading into an election. Now it does. How does it change that? It rigs the game,” said Mr Capriles.

Mr Maduro said the elections would go ahead as planned.

He has recently accused the opposition and the United States of plotting a coup against his government.

The mayor of Caracas, Antonio Ledezma, was arrested last month and has been charged with conspiracy.

They reduced the number of employees working on cash tills in order to create queues and “annoy the Venezuelan people”, said Mr Maduro.

The economic crisis in the oil-rich nation has been made worse by falling oil prices in international markets.

The opposition blames the socialist policies of the past 16 years for the crisis.