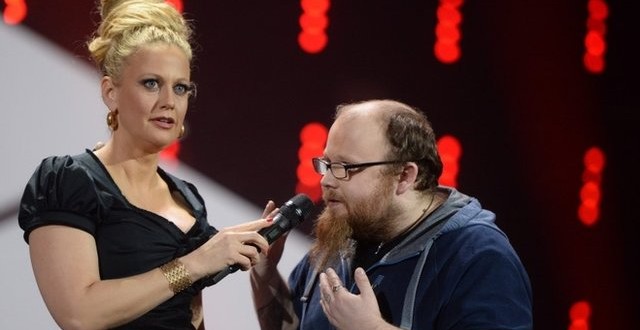 The winner of the search to find Germany’s Eurovision Song Contest entrant turned down the chance to represent his country on live TV.

Andreas Kummert initially thanked the public for selecting his song Heart of Stone as Germany’s entry.

But, shortly afterwards, he took the microphone from presenter Barbara Schoneberger and said: “I’m really not in the right shape to accept this.”

Instead, he said, “I give my title to Ann Sophie”, the 24-year-old runner-up.

Ann Sophie looked visibly confused by the turn of events; while many in the studio audience booed.

After being confirmed as the winner, the singer turned to the audience and asked them “do you even want this?”

Finally accepting her fate, she launched into her song, Black Smoke.

The finalists had been through three rounds of voting to decide who would represent Germany in the competition in Vienna in May.

Kummert gave no further explanation for his withdrawal – but the rock singer is no stranger to performing live, having won TV talent show The Voice of Germany in 2013.

Ann Sophie had made it to the finals by way of a fan-voted “wild card”, after competing against nine other young unknown singers at a concert in which the audience selected the victor.

She spent three years in New York studying at the famous Lee Strasberg Theatre and Film Institute training to be an actress, before returning to Hamburg.