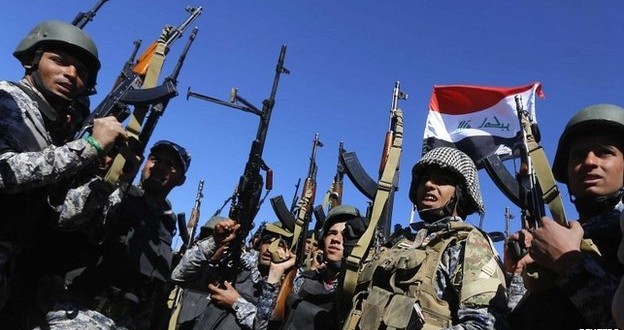 Iraqi army drives IS out of key town

Iraqi forces have pushed Islamic State (IS) fighters out of the western town of al-Baghdadi, the US military says.

The town, which was taken over by IS last month, is about 8km (5 miles) from a base housing hundreds of US troops who are training Iraqi soldiers.

Iraqi forces moved in after “precise and effective” air strikes by the US-led coalition, a statement said.

Meanwhile, IS was widely condemned on Friday after it bulldozed the ancient Assyrian city of Nimrud in Iraq.

IS began demolishing the site, which was founded in the 13th Century BC, on Thursday, according to Iraqi officials.

Why is Islamic State destroying Iraq’s history? – Explained in 60 secs

The head of the UN’s cultural agency condemned the “systematic” destruction in Iraq as a “war crime”.

Nimrud lies on the Tigris river, about 30km (18 miles) south-east of Mosul, which is under IS control.

Iraqi forces said they were making progress in their major offensive aimed at retaking the city of Tikrit, which lies between Mosul and the capital, Baghdad.

The operation to recapture the city involves some 30,000 soldiers and Shia militiamen.

Military commanders said the combined force had moved into the town of al-Dour on the southern outskirts of Tikrit.

One militia commander told Reuters news agency that al-Dour had been “totally liberated” but it was unclear if the entire town had fallen.

A senior commander in the main Shia alliance, Moeen al-Kadhimi, told the BBC that progress has been slowed by the extensive use of improvised explosives by IS.

“We’re very careful in our planning, especially because the [IS] strategy is based on planting explosive devices on the roads, houses, everything,” he told BBC correspondent Ahmed Maher, who is travelling with troops near Tikrit.

The Iraqi government’s offensive is being supported from the air by the US-led coalition, which says it has launched 26 air strikes on IS positions in Iraq since 22 March.

Nimrud (pictured) lies just south-east of Mosul, which IS controls

The US military said the capture of al-Baghdadi meant Iraqi forces were now poised to retake more territory from IS in Anbar province.

But the advance comes too late to save the ancient city of Nimrud – considered one of the world’s most important archaeological sites.

BBC Middle East correspondent Jim Muir says the attempt to destroy Nimrud is already being compared with the Taliban’s demolition of the Bamiyan Buddha rock sculptures in Afghanistan in 2001.

A spokesman for Ban Ki-Moon said the UN Secretary-General considered the assault “a war crime and represents an attack on humanity as a whole”.

The unrivalled riches of Nimrud

How antiquities help fund IS