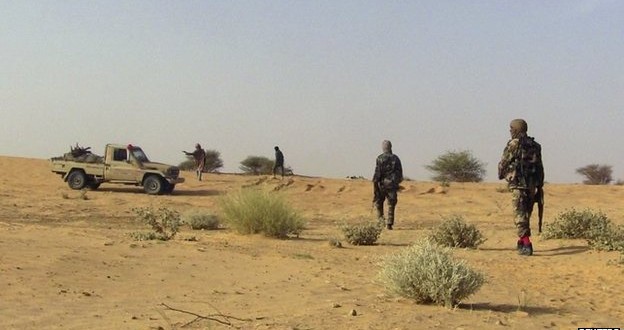 Four people have been killed in a machine-gun and grenade attack on a nightclub in Mali’s capital Bamako.

A BBC correspondent at the scene said a French national was shot dead at the nightclub bar. Two Malian men were then killed as the gunmen fled the scene.

A fourth man, believed to be Belgian, died when a grenade was thrown at his car in a nearby street.

A senior intelligence official told Reuters news agency that two people connected to the incident had been arrested.

The BBC’s Alex Duval Smith in Bamako says that French soldiers arrived quickly after the attack on Saturday. They confirmed that the man killed at the bar was a French national.

Our correspondent says that one of the Malian victims is believed to have been a police officer, the other a security guard.

A witness told the BBC that he saw four men flee the scene in a vehicle and one on a motorbike.

Islamist militants have been fighting the Malian army for a number of years.

The Malian army has been fighting Islamist militants for years

French and African troops intervened in Mali in January 2013 to stop the southern advance of al-Qaeda-linked fighters on the capital, Bamako.

The fighters were eventually expelled from towns across the north, but both nomadic Tuareg rebels and other Islamist militant groups have remained active.

The Malian government signed a ceasefire deal with an alliance of Tuareg rebels in the country’s troubled north in February.

Northern Mali has been a flashpoint of conflict since Mali’s independence from French rule in 1960, with Tuareg rebels campaigning for independence or more autonomy.

The conflict has become more complex with emergence of jihadi groups, which roam freely across parts of the Sahara desert.