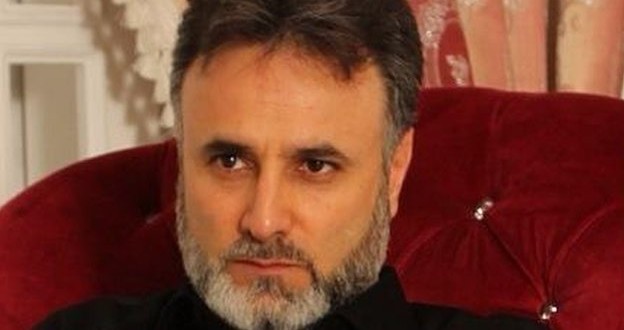 Umarali Kuvatov had been living in exile in Turkey and was killed by a shot to the head late on Thursday.

His Group 24 movement, which opposes the government of President Emomali Rakhmon, was banned in October.

Tajikistan had accused Mr Kuvatov of various crimes and asked for him to be extradited, but Turkey had refused.

The Turkish authorities arrested him in December for alleged visa fraud, but he was freed shortly after, Turkish media reported.

Mr Kuvatov’s family has been left distraught by his death

His killing comes two days after a Tajik court sentenced another member of Group 24 to 17 years in prison for attempting to seize power and insulting the president.

A Tajik opposition representative in exile told the BBC that Mr Kuvatov was killed after eating out with his wife and their two young children.

After the meal he suddenly felt ill and went out into the street, where soon afterwards he was shot, the representative said.

His wife managed to inform relatives of the murder, but she and the two children all later lost consciousness because they were deliberately poisoned, the opposition says.

After leaving the country in 2011, Umarali Kuvatov spent time in Moscow and Dubai where he set up the opposition Group 24, made up mainly of former Tajik business people.

In recent months he was considered an increasing threat because he had money and because he was gaining influence and popularity among Tajik migrant groups abroad.

Matters reached a head when Mr Kuvatov tried to organise an anti-government rally in Dushanbe through social media in October last year.

The Tajik authorities reacted with a major security clampdown and Group 24 was declared an extremist organisation.

Describing himself as an entrepreneur on his Facebook page, Mr Kuvatov became a millionaire in Tajikistan in the early 2000s, making his money from trade, construction and later in the oil business.

Initially he enjoyed a good relationship with members of President Rakhmon’s family.

He is reported to have worked closely with the president’s son-in-law from 2001 to 2012, when they supplied fuel to Nato forces in Afghanistan.

He went into opposition and then left the country.

Turkish anti-terrorism police are investigating his murder. Police say that he was dead before they arrived at the scene.