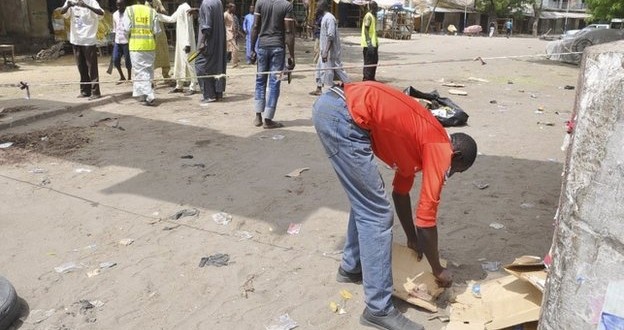 Maiduguri is a former stronghold of the militant group Boko Haram

At least five blasts have killed 50 people and injured 56 in the city of Maiduguri in north-eastern Nigeria, an official has told the BBC.

Witnesses in one of the markets described gory scenes with men, women and children lying on the ground.

Maiduguri was once the stronghold of the militant group Boko Haram, which is seeking to establish an Islamic state.

The Islamist group has not yet commented on the latest attacks, but it has used suicide bombers before.

After being pushed out of Maiduguri last year, the Islamist fighters retreated to the nearby Sambisa Forest from where they launched attacks on villages and towns in the north-east, taking over swathes of territory.

The attacks took place over about three hours – the first one targeting the city’s Baga fish market.

The explosion was caused by a suicide bomber in a rickshaw, eyewitnesses told the BBC.

It was not clear if the bomber was male or female.

Later Monday Market came under an attack. A trader there told the BBC that two other female bombers seemed to have exploded devices.

One had a bomb strapped to her body that detonated as she was being scanned at the gate leading into the market, he said.

Another woman exploded the bomb she was carrying in a bag a few feet away, he added.

It was difficult to know how many people had died as body parts littered the area.

The third blast was at the Borno Express bus station where it is reported that there were two explosions.

A survivor of the first blast said it occurred when a boy aged about 16 moved into a crowd by the gates holding what looked like a remote control.

Security officials were about to stop the teenager when there was a blast, he told the BBC.

The witness said he was blown over by the impact and when he came to he saw at least six dead bodies.

Muhammad Kanar, the co-ordinator of the National Emergency Management Agency in the north-east, told the BBC that his rescue workers had counted a total of 49 people dead from all the blasts.

Nigeria’s presidential and parliamentary elections have been postponed by six week to 28 March to give troops more time to beat back Boko Haram.

Are you in the area? Do you have any information you would like to share? You can email us at [email protected].

If you are happy to speak further to a BBC journalist please include a contact telephone number.