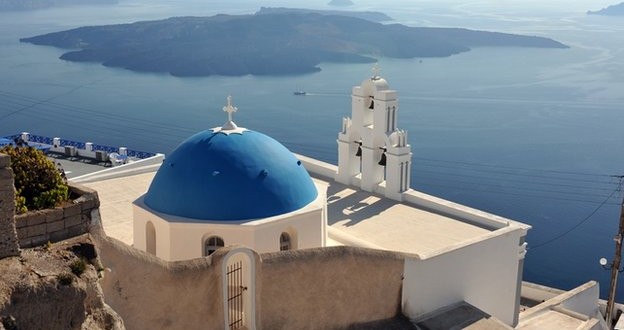 Greece ‘may use amateur tax sleuths’

Will Greek tax-dodgers have to beware of holidaymakers bearing cameras?

The Greek government could hire “non-professional” tax inspectors, including tourists, to spy on tax evaders, according to a leaked document.

Students and housewives could also be used as part of the reported scheme to tackle fraud, which could include hidden cameras and recording devices.

It is said to be one of the ideas Greece will raise at a meeting of eurozone finance ministers on Monday.

It needs to convince them it is serious about reform to receive further credit.

Eurozone leaders want to extend help on Greece’s €240bn (£176bn; $272bn) bailout until the end of June in return for commitments to further reform.

The letter is attributed to Greek Finance Minister Yanis Varoufakis

“Tax authorities are not only understaffed but immersed in the logic of book-checking when the real problem lies off the books.”

Informal tax inspectors would be hired on a “strictly short-term casual basis – no longer than two months and without any prospect of being rehired”.

Mr Varoufakis is quoted as saying that the very news that there were thousands of casual onlookers carrying spying equipment on behalf of the tax authorities could shift attitudes quickly.

The proposal was immediately received with some scepticism, the BBC’s world affairs correspondent Mike Wooldridge reports.

Other proposals reportedly include taxing online gambling, streamlining the bureaucracy and activating an existing plan for an independent watchdog to monitor government fiscal policy.

The new government also wants to spend more money to help those who have been hardest hit by the country’s long recession.