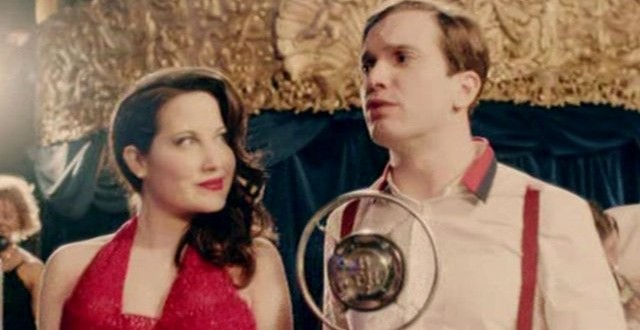 A man who normally performs as a Mick Jagger tribute act will compete for the UK in May’s Eurovision Song Contest.

Alex Larke, 35, from Hertfordshire, who performs with the Rolling Clones, is teaming up with Bianca Nicholas, who is 26 and from Kent, as Electro Velvet.

Their song, Still in Love With You, is an up-tempo electric swing track.

Last year Molly Smitten-Downes came 17th for the UK with Children of the Universe. This year’s contest is in Vienna on 23 May.

The UK has only placed in the top 10 once since Jemini’s infamous “nul points” in 2003, when Jade Ewan was fifth in 2009 with the Andrew Lloyd Webber written song It’s My Time.

The last time it won was in 1997 when it was represented by Katrina and the Waves with Love Shine a Light.

Bianca Nicholas, of Beckenham, was a contestant on BBC’s The Voice in 2013, although none of the judges swivelled their chair round in support of her performance, meaning she did not progress any further than the initial heats.

She released a single in 2011 – Hold on to Your Dreams – which sold enough copies to enter the top 100 singles chart.

She has the serious genetic condition cystic fibrosis, which affects the lungs, and has previously spoken about how singing has improved her breathing and lung function.

Due to her affiliation with the Cystic Fibrosis Trust, she has sung in front of Royal Family members at charity galas.

Larke, from Welwyn Garden City, has performed around the world with his Rolling Stones tribute act, and splits his time between performing and teaching in a primary school.

Larke said: “I feel incredibly privileged and humbled to be representing the United Kingdom in the Eurovision Song Contest in Vienna, for this massively historic 60th anniversary event.

“We have a fantastic song and will work as hard as is humanly possible to bring the contest home and make our great nation proud. It’s time to get this party started! See you in Vienna!”

The song Electro Velvet will be performing was written by David Mindel and Adrian Bax White and chosen through an open selection process which saw hundreds of entries from both professional and amateur songwriters.

Austria’s Conchita Wurst won the Eurovision Song Contest last year, meaning it will be held in her home country.