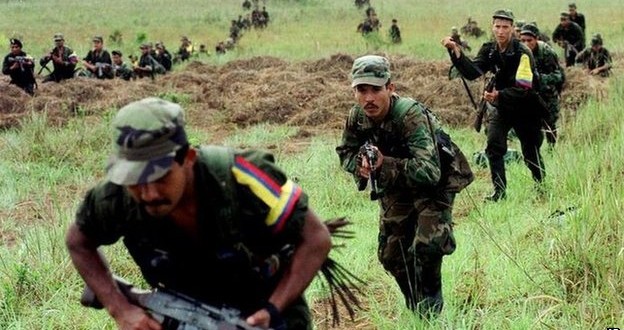 Colombia’s government and Farc rebels have agreed to work together to remove landmines in rural areas of the country where they have fought since the 1960s.

The announcement was made in Cuba, where both sides have been engaged in peace talks for more than two years.

Under the deal, Farc rebels will work alongside members of the military to remove the landmines and other explosive devices.

Colombia is one of the most heavily mined countries in the world.

More than 11,000 people have been injured or killed by landmines in Colombia over the past 15 years.

“I would like to congratulate our negotiating team and acknowledge of the Farc are doing, because this is bringing us closer to the shared objective of reaching peace in Colombia,” he said.

Mr De la Calle, who is leading the government’s negotiating team, is a former Colombian vice-president

The demining and decontamination operation will be overseen by experts from Norway, one of the countries that has been facilitating the peace negotiations.

The Farc members involved in the effort will not wear uniforms or carry weapons, said Mr De la Calle.

The operation was announced in a joint statement in Havana, marking the end of a round of negotiations that focused on the rights of victims.

Farc negotiators have been engaged in peace talks with the Colombian government since November 2012.

They have reached partial agreements on a number of issues, including on the drugs trade, land reform and political participation.

More than 220,000 people are estimated to have died in five decades of conflict.