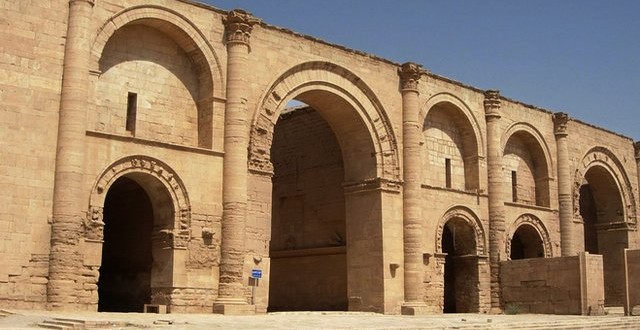 Hatra was a fortified city that withstood attack by the Romans

A tourism and antiquities ministry official said the extent of the damage at the Unesco world heritage site was unclear, but he had received reports that it had been demolished.

Hatra was founded in the days of the Parthian Empire over 2,000 years ago.

Militants have recently bulldozed ruins at the Assyrian city of Nimrud and destroyed museum artefacts in Mosul.

Unesco condemned the destruction of the ancient city and said that it showed the “contempt” that IS has for the history and heritage of the Arab people.

“The destruction of Hatra marks a turning point in the appalling strategy of cultural cleansing under way in Iraq,” said Unesco head Irina Bokova in a statement on Saturday.

Hatra, located about 110km (68 miles) south-west of Mosul, was a fortified city that withstood invasions by the Romans thanks to its thick walls reinforced by towers.

It is home to numerous temples and sculptures dedicated to gods including Apollo and Poseidon.

Said Mamuzini, a Kurdistan Democratic Party (KDP) local official, said the militants had used explosives to blow up buildings and were bulldozing other sections.

“The city of Hatra is very big and many artefacts of that era were protected inside the site,” he said, adding that the militants had already taken away gold and silver.

One official told the Associated Press that residents in the area had heard two powerful explosions.

In a statement, the tourism and antiquities ministry blamed the international community for failing to help Iraq protect its ancient monuments.

It added: “The delay in international support for Iraq has encouraged terrorists to commit another crime of stealing and demolishing the remains of the city of Hatra.”

Reports of the bulldozer attack in Nimrud, an Assyrian city founded in the 13th Century BC, emerged on Thursday.

On Friday Unesco head Irina Bokova condemned the “cultural cleansing” in Iraq as a “war crime”.

Why is Islamic State destroying Iraq’s history? – Explained in 60 seconds

Last week, IS released a video apparently showing militants with sledgehammers destroying statues and other artefacts in a museum in Mosul.

In the video, the objects are described as “false idols” and their destruction defended in religious terms.

IS has controlled Mosul, Iraq’s second-largest city, and nearby areas since June 2014 – a region with nearly 1,800 of the country’s 12,000 registered archaeological sites.

The Assyrian city of Nimrud, south-east of Mosul, is also being attacked

The Parthian Empire was a major political and cultural force in ancient Iran. At the height of its power in the second century AD, it extended from modern-day Pakistan to Syria.

Hatra later flourished under Arab rulers, and became a major trading-post on the Silk Road across the Asian continent.

Have you ever visited Hatra or Nimrud? Do you have pictures of these historical landmarks? Please email your comments and pictures to [email protected] Please remember to leave your phone number if you are happy to be contacted by a BBC journalist.