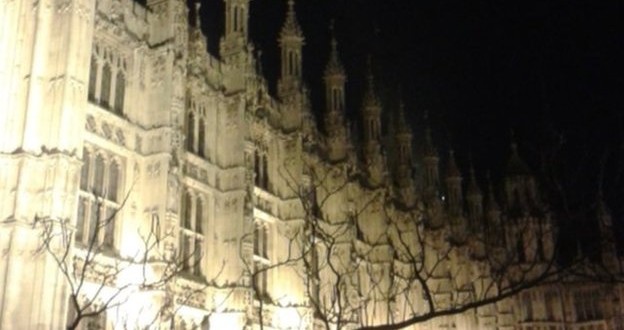 Man spotted on roof of Parliament

Police have been called to an incident involving a man “trespassing” on the roof of the Houses of Parliament.

A police spokesman said they had no description of the man, who was first spotted at 21:15 GMT.

Scotland Yard could not give a precise location for the man or an explanation of how he reached the roof.

London Fire Brigade and the London Ambulance Service are also in attendance. It is not known at this stage why the man is there.

The roof has previously been targeted by campaign groups, including those opposed to a third runway at Heathrow and by Greenpeace.

Emergency crews were sent to the scene

A Scotland Yard spokesman said: “At 9.15pm officers were made aware of a man trespassing on the roof at the Palace of Westminster.”

The fire service said it had three crews on standby at the scene but could not comment on any action being taken to gain access to the roof.

Police said the man was moving around so they could not pinpoint a precise position on the roof. The man had been spotted by officers on duty in the area.

Police said they were taking the incident seriously

BBC News correspondent Victoria Fritz, who is at the scene, said the man has been moving around a lot, pacing up and down between the buttresses of the building.

The man was wearing a grey, long-sleeved top and dark trousers.

The police are trying to talk to him, and there have been occasional muffled shouts from the roof, our correspondent said.

It was something of a mystery why he was up there but police were taking it seriously, she added.

Are you in the area? Did you see the incident? You can email [email protected] with your experience. Please include a telephone number if you are willing to be contacted by a BBC journalist.