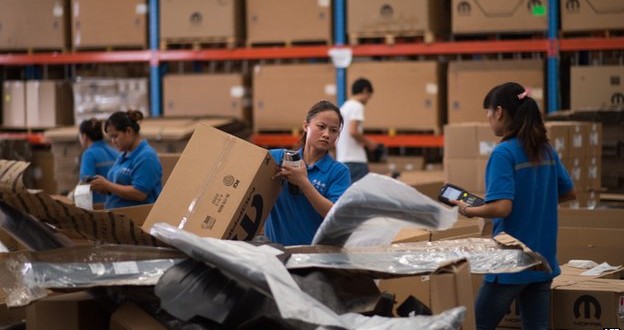 The growth in exports was well ahead of analyst expectations.

China’s economy grew by 7.4% in 2014, its weakest for almost a quarter of a century, and recent indicators show signs the slowdown is continuing.

Customs officials put the surge in exports down to a flurry of activities by companies to get orders processed before the Chinese New Year, which fell in the middle of February this year.

“Affected by the Spring Festival factors, export companies in the country again rushed to export ahead of the holiday and only resumed working after it,” a statement said.

The surplus figure stood at $8.9bn in the same period last year.

But he Lunar New Year had fallen on 31 January in 2014, followed by a week-long national holiday, which meant it provided a weak comparison with this February.

For the first two months of the year, China’s trade surplus has totalled $120.7bn, following the $60bn surplus in January.

Premier Li Keqiang on Thursday announced a lowered growth target of “approximately 7%” for this year, and cut the trade growth target for 2015 to “around 6%”.