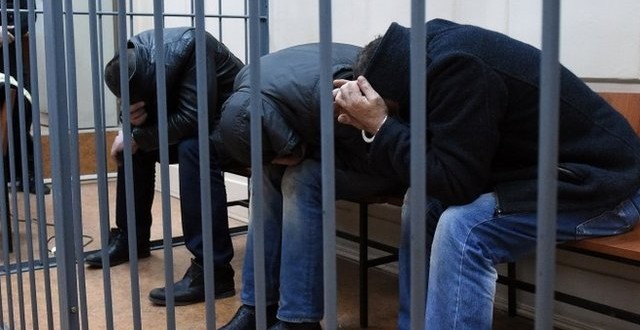 The suspects were shown appearing in court, as Sarah Rainsford reports

A Moscow court has charged two men in connection with the murder of Russian opposition activist Boris Nemtsov.

It said one of the men, Zaur Dadayev, had admitted involvement in the shooting on a bridge near the Kremlin late on 27 February.

He and the other accused, Anzor Gubashev, are of Chechen origin, Russian reports say.

Three other suspects in the case also appeared before the court on Sunday and have been remanded in custody.

Nemtsov, a former deputy prime minister and veteran liberal politician, 55, was shot in the back four times as he was walking with his girlfriend within sight of the Kremlin. He was buried in Moscow on Tuesday.

Anzor Gubashev and Mr Dadayev, who are both accused of organising and carrying out the murder, were brought into court amid heavy security.

The guilt of Zaur Dadayev was ‘confirmed by his confession’, the judge said

Little is known about the men, but reports say Mr Dadayev once served in a battalion of interior ministry troops in Chechnya.

The other suspects include Mr Gubashev’s younger brother Shagid Gubashev and two men named as Ramzan Bakhayev and Tamerlan Eskerkhanov. Reports say all three have denied any involvement in the murder.

Four of the men come from the northern Caucasus region and were detained in the republic of Ingushetia which borders Chechnya, say Russian media reports.

At the scene: Sarah Rainsford, Moscow

There were armoured vehicles and armed police around the Moscow courthouse all morning. The suspects were eventually brought by van, and bundled through a back door by heavily armed guards in balaclavas.

They are accused of both organising and carrying out the shooting of Boris Nemtsov.

Russian media report that at least two of the men had been living in Moscow for a year. One worked as a shop security guard and his brother as a lorry driver.

So far though, there are no clues on whether they were hired for the killing, as Mr Nemtsov’s supporters believe – or on what the possible motive for this high-profile murder might have been.

The Russian Investigations Committee is treating the case as a “contract killing”, Interfax news agency reported.

According to the sections of the criminal code cited in court, investigators believe the murder was carried out by a group of people, that it was committed on contract for financial gains, and that it also involved extortion and banditry, Interfax says.

President Vladimir Putin has condemned Nemtsov’s murder and called for an end to “shameful” political killings in Russia.

But leading opposition figure Alexei Navalny accused the Kremlin of ordering the assassination to cow the opposition amid Russia’s mounting economic problems.

Nemtsov was killed just days before a march he was organising against the war in Ukraine.

Some 50,000 people attended a rally near the Kremlin in protest at his death on 1 March and thousands turned out to pay their respects at his funeral.