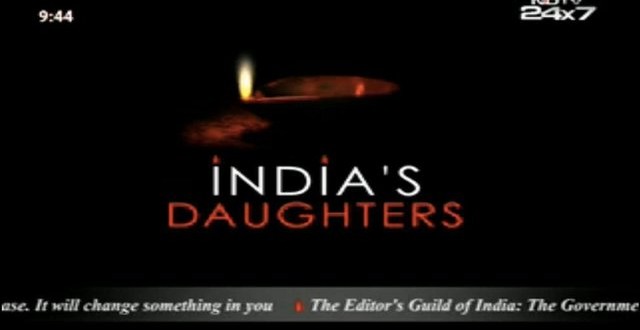 India’s NDTV has halted programming in protest at the banning of the BBC documentary India’s Daughter.

The network ran a slate referring to the film’s title, during the hour-long slot when it should have aired.

The film, which features an interview with one of the men convicted of the Delhi bus rape, was due to be broadcast by the channel on Sunday night.

But it was outlawed by the Indian authorities on the grounds of “objectionable content”.

Other Twitter users praised the decision. One comment read: “Kudos @ndtv for the #IndiasDaughter protest. A surprisingly mature decision in a mediascape (sic) that seems to deteriorate buy by the day.”

Another said: “@ndtv they may not always be right, but this time they are.”NDTV

Filmmaker Leslee Udwin, who directed India’s Daughter, has rejected claims by the authorities that the documentary contained offensive remarks towards women, and could cause a public outcry.

She also denied allegations that she broke a contract with the prison by airing the interview with rapist, Mukesh Singh.

He is facing the death penalty for his part in the rape and murder of a medical student on a bus in Delhi in 2012, which sparked protests across India.

During the film, which aired on BBC4 in Britain on Wednesday night, he showed no remorse and blamed the woman for not behaving like a “decent girl”.

The BBC’s director of television, Danny Cohen defended the corporation’s decision to show the film in the UK, despite a request from the Indian government that it shelve the broadcast.

“We do not feel the film as currently edited could ever be construed as derogatory to women or an affront to their dignity,” he said.