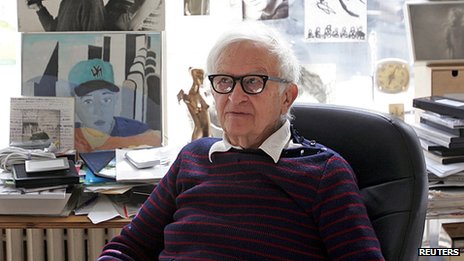 Maysles made more than 50 films during his career

Albert Maysles, whose 1970 film Gimme Shelter followed the Rolling Stones on their US tour, has died aged 88.

Maysles “created groundbreaking films, inspired filmmakers and touched all those with his humanity, presence and his belief in the power of love,” his family said.

Gimme Shelter captured the stabbing to death of a fan at the Rolling Stones performance at the Altamont festival.

Between them, the brothers made more than 50 films and were considered among the most prominent figures in documentary films and developed the art of making non-fiction, fly-on-the-wall films without the use of scripts, sets or narration.

The brothers were nominated for an Oscar in 1974 for best documentary short subject for their film Christo’s Valley Curtain.

Paying tribute on Twitter, the American Academy of Motion Pictures Arts and Sciences quote Maysles writing: “Making a film isn’t finding the answer to a question; it’s trying to capture life as it is. -Albert Maysles”.

Actor Robert Duvall, nominated for best supporting actor at this year’s Oscars, called Maysles “a genius of the documentary film world,” adding, “He left us with a great legacy and among the best documentaries that will ever be seen. He will be missed.”

The Maysles brothers’ 1975 work “Grey Gardens” explored the lives in a run-down mansion, of relatives of Jacqueline Kennedy Onassis.

Their other celebrity subjects included Marlon Brando and Truman Capote.

Albert Maysles’ final documentary In Transit will premiere at the 2015 Tribeca Film Festival in New York.