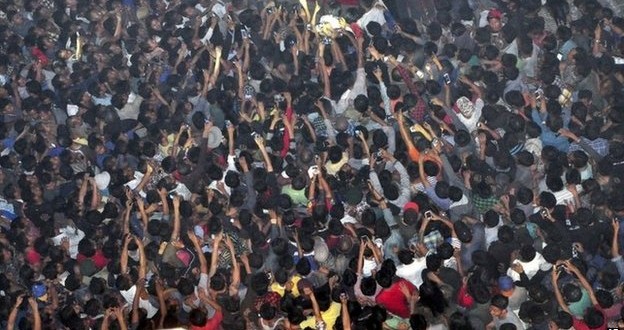 Hundreds of people dragged the suspect through the streets of Dimapur

Police in north-eastern India say they have arrested 18 people in connection with the lynching of a suspected rapist who was taken from prison by a mob.

Farid Khan was stripped naked by the crowd, beaten and dragged through the streets before being hanged in Dimapur, the main city in Nagaland state.

Hundreds of policemen have been patrolling the streets of Dimapur since the incident amid increasing tension.

A curfew was also imposed in the city on Sunday to maintain peace.

Police say Khan was a Bengali-speaking Muslim trader from neighbouring Assam state. He was arrested in February on charges of raping a 19-year-old tribal woman several times.

Police said they had arrested 18 men for “rioting and unlawful assembly” – it is unclear whether these men were directly involved in the killing.

“We are now verifying if besides being part of the mob they were also directly involved in the lynching,” senior police official Wabang Jamir told AFP news agency.

He said the police had “identified many more people from videos and photos” of the incident which were posted on social media.

The lynching happened in the midst of a controversy in India over the government’s decision to ban India’s Daughter, a film about the 2012 gang rape of a student.

But correspondents say the killing is also linked to rising ethnic tensions in Nagaland, whose indigenous tribespeople have blamed migrants from neighbouring Assam state and Bangladesh for settling on their lands.

Vigilante justice is not unheard of in India but it is rarely seen on this scale.