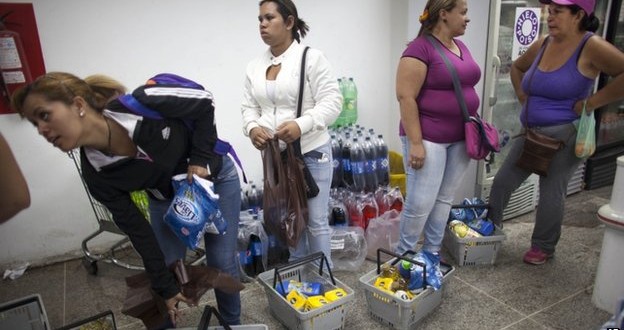 Venezuela is due to begin installing about 20,000 fingerprint scanners at supermarkets across the country.

Over the last year there have been long queues at supermarkets because of widespread shortages of basic goods.

Mr Maduro said the shortages were due to manipulation of the food supply and prices.

Last month the owners of several chains of supermarkets and drugstores were arrested for allegedly artificially creating long queues by not opening enough tills.

Mr Maduro has also accused Colombian food smugglers of buying up price-controlled goods in state-run supermarkets along the border.

The lack of staple foods and medicines has contributed to discontent and to frequent large, often violent anti-government demonstrations.

The economic crisis has been made worse by falling oil prices.

Venezuela’s plummeting currency rates and the falling price of oil by nearly half since November has diminished its supply of dollars to buy imported food.