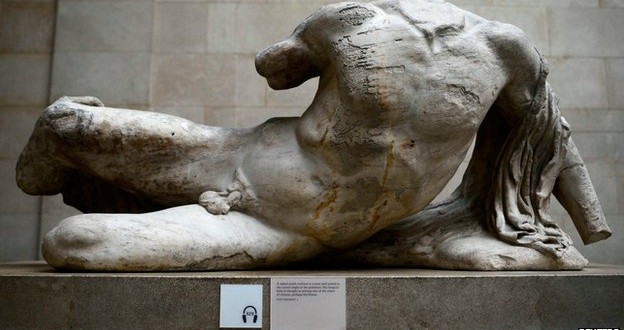 The Ilissos statue was loaned to Russia in December

A parliamentary move to expedite the return of the Elgin Marbles from the UK to Greece will be made later.

In an early day motion, Lib Dem MP Andrew George will urge the government to make moves towards “reuniting” them with those in the Acropolis Museum.

The marbles, once part of the 2,500-year-old Parthenon temple, but removed by Lord Elgin 200 years ago, are held in the British Museum.

Greece insists they were taken illegally and should be returned.

In his early day motion, Mr George will call for the government to “demonstrate that Britain is prepared to… reunite these British-held Parthenon sculptures with those now displayed in the purpose-built Acropolis Museum in the shadow of the monument to which they belong, the Parthenon in Athens”.

Mr George chairs the Marbles Reunited organisation, a campaign group which lobbies for the sculptures to be sent back to Greece.

The group is calling on the UK government to respond to an invitation issued in 2013 by the United Nations cultural agency Unesco concerning mediation over the future of the marbles.

The Elgin Marbles at the British Museum

In December the British Museum loaned one of the Elgin Marbles for the first time to Russia for a display in St Petersburg’s State Hermitage Museum.

The Greek Prime Minister at the time, Antonis Samaras, said the British Museum’s decision was “an affront” to the Greek people.

Greece maintains that Lord Elgin removed the marbles illegally between 1801 and 1812, while the country was under Turkish occupation as part of the Ottoman Empire.

The items have remained in the British Museum ever since.

George Clooney’s wife, lawyer Amal Clooney, has previously held talks with the Greek government as part of the ongoing campaign to have the sculptures returned from Britain.