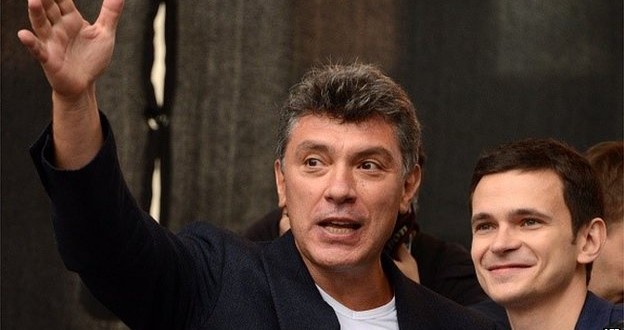 A close ally of murdered Russian opposition politician Boris Nemtsov says he is “totally sceptical” that the two men charged organised his killing.

“The trigger man will be blamed, while those who actually ordered the killing will go free,” Ilya Yashin, co-founder of Mr Nemtsov’s party, said on Sunday.

His comments came after two men of Chechen origin were charged with his murder and three others arrested.

Mr Yashin rejected suggestions radical Islamists were behind the murder.

“The investigators’ nonsensical theory about Islamist motives in the killing suits the Kremlin and takes [President] Putin out of the firing line,” Mr Yashin said on Twitter (in Russian).

Those behind the killing were in Russia and even in government, he said separately in a BBC interview.

On Sunday a court in Moscow charged Zaur Dadayev and Anzor Gubashev with shooting Mr Nemtsov on a bridge near the Kremlin on 27 January. Mr Dadayev had admitted his involvement, the court said.

Three other suspects were remanded in custody. A sixth man was reported to have killed himself in a standoff with police in the Chechen capital Grozny.

Chechen leader Ramzan Kadyrov, an ally of President Putin, described Mr Dadayev as a devout Muslim who was shocked by cartoons of the Prophet Muhammad published in French satirical magazine Charlie Hebdo.

“All who know Zaur [Dadayev] confirm that he is a deep believer and also that he, like all Muslims, was shocked by the activities of Charlie and comments in support of printing the cartoons.

Along with other Russian politicians and activists, Mr Nemtsov had condemned the killing of 12 journalists at the French satirical magazine by Islamist extremists.

But he also criticised threats made by the Chechen leader towards those who did not condemn cartoons published by the magazine.

Mr Kadyrov had declared former oil tycoon Mikhail Khodorkovsky his “personal enemy” for urging other papers to republish the Charlie Hebdo cartoons. He had also said Ekho Mosvky editor-in-chief Alexei Venediktov “would be called to account” after his station’s website ran a poll on whether media should publish similar cartoons.

“Everybody is already sick and tired of Ramzan’s threats, but he is certain that [President Vladimir] Putin will not let anyone touch him, so he is growing increasingly brazen every day,” Mr Nemtsov wrote on his Facebook page in January.

The guilt of Zaur Dadayev was “confirmed by his confession”, the judge said

Mr Yashin told the BBC that Mr Nemtsov had not been a prominent critic of radical Islam and had concentrated his attacks on President Vladimir Putin and his government.

He said he did not believe Mr Nemtsov’s killers were from outside Russia, calling his murder “an act of terror to scare society”.

If the Russian authorities had any proof that the two men charged were the killers, that proof should be made public, he said.

The location of the murder, right next to the Kremlin, made him think that the killers could not have acted without support from the authorities, he said.

He therefore believed that those people criticised by Mr Nemtsov in recent years should be under investigation.

The suspects were bundled into court through the back door

The three suspects remanded in custody are Mr Gubashev’s younger brother, Shagid Gubashev, and two men named as Ramzan Bakhayev and Tamerlan Eskerkhanov. Reports say all three have denied any involvement in the murder.

Four of the five men in custody are from the northern Caucasus region and were detained in the republic of Ingushetia which borders Chechnya, Russian media say.

The Russian Investigations Committee is treating the case as a “contract killing”, Interfax news agency reported.

President Vladimir Putin has condemned Mr Nemtsov’s murder and called for an end to “shameful” political killings in Russia.

But leading opposition figure Alexei Navalny has accused the Kremlin of ordering the assassination to cow the opposition amid Russia’s mounting economic problems.

Mr Nemtsov was killed days before a march he had been organising against the conflict in Ukraine.