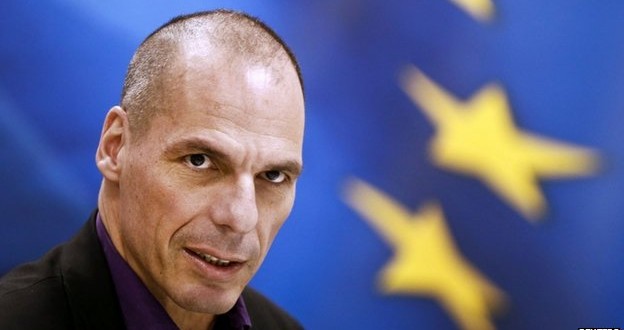 Finance Minister Yanis Varoufakis has said it is possible that a referendum could be held if the eurozone rejects Greece’s debt renegotiation plans.

The comments came ahead of Monday’s Eurogroup meeting in Brussels, where Greece is to give detailed plans of its debt and growth terms.

And the finance ministry clarified that eurozone membership was not in doubt.

In an Italian newspaper interview on Sunday Mr Varoufakis was asked what his options were if a deal was not agreed.

“If needed, if we encounter implacability, we will resort to the Greek people either through elections or a referendum,” he told Corriere della Sera.

This was interpreted by some as a threat to leave the eurozone if talks broke down, something the Greek government was quick to deny.

Greek officials pointed out that the words “for the euro” had been added to Mr Varoufakis’s remarks in brackets in the article. Greece’s eurozone membership was “a given” and did not form any part of negotiations with the Eurogroup, they added.

Mr Varoufakis later criticised the reports as “wilful attempts to undermine the good course” of attempts to agree a deal with creditors.

In a widely leaked letter to the Eurogroup, Mr Varoufakis set out seven key reforms which he hopes will appease eurozone lenders and allow the next instalment of bailout money to be released.

Greece aims to save €200m (£140m) through public spending cuts, as well as streamlining bureaucracy and cracking down on tax evasion.

European Commission Vice President Valdis Dombrovskis has rejected the letter, telling a German newspaper that “a letter here or there isn’t going to change much.”

He said Greece must first implement its reforms, adding that he did not expect a deal to be completed at the Monday meeting.

Greece needs to agree terms so that it will become eligible for more credit from the eurozone and the International Monetary Fund. This would in turn allow its banks to finance themselves from the European Central Bank.