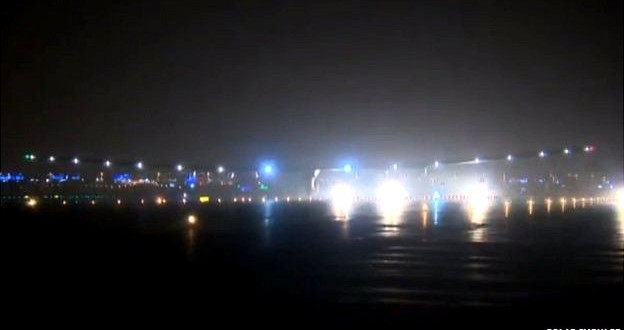 The plane landed in darkness in Muscat

A record-breaking attempt to fly around the world in a solar-powered plane has completed its first leg.

The aircraft – called Solar Impulse-2 – took off from Abu Dhabi, heading east to Muscat in Oman.

With businessman and pilot Andre Borschbeg at the controls, the aircraft touched down in Oman at 16:14 GMT after a 12-hour flight.

Over the next five months, it will skip from continent to continent, crossing both the Pacific and Atlantic oceans.

“And there we are… confirmation we’re down. Solar Impulse has touched the ground,” a flight controller said as the plane’s wheels touched the tarmac.

Mr Borschberg will share the pilot duties in due course with fellow Swiss, Bertrand Piccard.

The plan is stop off at various locations around the globe, to rest and to carry out maintenance, and also to spread a campaigning message about clean technologies.

Before taking off, Borschberg told BBC News: “I am confident we have a very special aeroplane, and it will have to be to get us across the big oceans.

Monday’s leg to Oman covered about 400km. Details of the journey are being relayed on the internet.

It’s a deep-breath moment in the history of technology as Solar Impulse soars to the skies.

Because, pinch yourself, solar power is predicted to become the dominant source of electricity globally by 2050.

The price of solar electric panels fell 70% in recent years and costs are expected to halve again this decade.

And Deutsche Bank forecasts that, based on current fossil fuel prices, solar will produce power as cheaply as gas in two thirds of the world before 2020.

In the UK the solar industry thinks it can compete with wind within 18 months and with gas in the near future. In the USA, solar jobs already outnumber coal jobs.

The solar revolution was sparked by government subsidies, which attracted venture capitalists to fund innovation and created a huge market that Chinese manufacturers are battling to exploit.

The solar boom is a huge help in the battle against climate change, but scientists warn it’s not nearly enough. And we must find ways of storing that mighty but capricious power, and making it work with the grid.

BBC iWonder: Is jet travel becoming the dirtiest way to cross the planet?

The Solar Impulse project has already set a number of world records for solar-powered flight, including making a high-profile transit of the US in 2013.

“For the Pacific crossing, it was an easy decision. We had a very good window on 2 May. But when we were on the East Coast of the USA, we had to look to cross the Atlantic and we had to wait 30 days to find a good window. And then it was easy – 3.5 days and we were in Seville, [Spain],” he told BBC News.