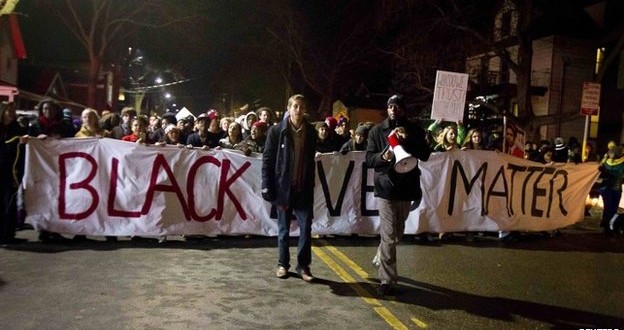 Protestors in Wisconsin took to the streets for a third day over the shooting of an unarmed black teenager by a white police officer.

More than 100 people marched to the state’s Capitol in Madison on Sunday, beating drums and holding placards.

Nineteen-year-old Tony Robinson Jr was shot on Friday evening in an apartment. He was unarmed, but police say he attacked the officer who shot him.

A series of police shootings have stoked racial tensions in the US.

One of the chants that rang out on Sunday in Madison was: “The people united will never be defeated.”

Officer Matt Kenny was responding to an emergency call about a man obstructing traffic who had allegedly been involved in an assault, when he confronted Robinson.

The officer followed the teenager to an apartment, and forced his way into the building after hearing a disturbance.

Madison Police Chief Mike Koval said the officer was struck on the head before shooting the unarmed man.

Over 100 people demonstrated after the shooting on the unarmed teenager

Police stand guard outside the building where Robinson was shot

Robinson was declared dead at a hospital.

Mr Kenny has been placed on leave while the Wisconsin Department of Justice conducts an investigation.

“People need to tell me squarely how upset they are with the Madison Police Department.”

The city’s mayor, Paul Soglin, released a statement calling the shooting “a tragedy beyond description” and promised to be transparent in communicating the details of the investigation.

Mr Kenny has been a member of the Madison police force for 12 years. He was cleared of wrongdoing and commended for his actions during a 2007 shooting incident.