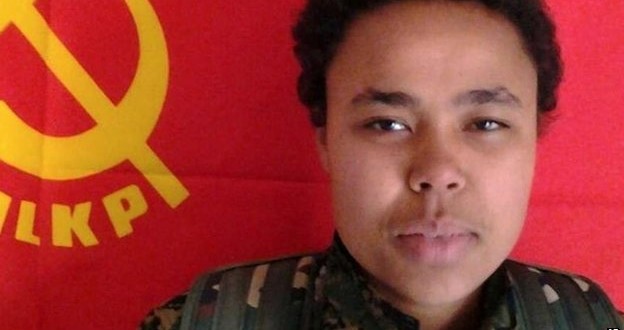 A 19-year-old German woman has become the first female foreign fighter to be killed battling Islamic State (IS) alongside Kurdish militia groups.

Ivana Hoffman, whose parents are South African, was killed on Saturday near Tal Tamr, in north-western Syria.

She had been fighting alongside the Kurdish Popular Protection Units (YPG), their spokesperson confirmed.

A MLKP statement, which referred to her by her nom de guerre Avasin Tekosin Gunes, declared her to be “immortal”.

A video was also posted online showing a woman identified as Ms Hoffman with her face covered with a veil, holding a rifle and explaining in German that she came to Syria to “fight for humanity and freedom”.

The Syrian Observatory for Human Rights said on Sunday that at least 40 Kurdish fighters and IS militants had been killed in the battle for Tal Tamr.

Ms Hoffman is the third foreign fighter known to have been killed fighting IS in Syria’s Hassakeh province in the past fortnight.

Briton Konstandinos Erik Scurfield, a former Royal Marine, was shot dead on 2 March while fighting for the YPG in Tal Khuzela.

The previous week, Australian Ashley Johnston was reportedly killed when the vehicle he was travelling in with fellow YPG members broke down and was surrounded by IS militants near Tal Hamis.

About 100 Western volunteers are believed to be fighting IS alongside Kurdish forces in northern Syria and neighbouring Iraq.