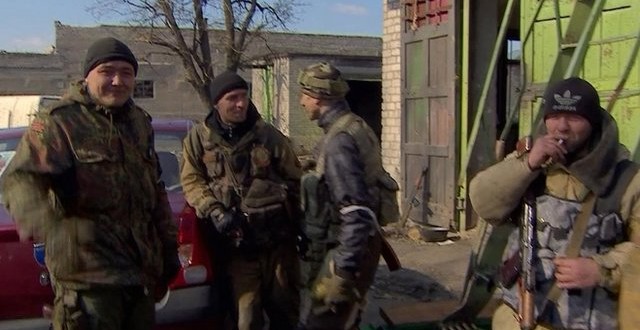 The BBC’s Tom Burridge near Donetsk: “Although there is a sense that there has been a pause in the real fighting, this war is far from over”

Speaking on TV, Mr Poroshenko said his government forces had also pulled back “the lion’s share” of their rocket and heavy artillery systems.

Under a ceasefire reached in February both sides were due to pull back heavy weapons by the beginning of March.

The ceasefire appears to be taking hold despite continuing clashes.

The opposing sides have accused each other of breaking the truce or using it as a cover to regroup.

At least 6,000 people are believed to have been killed and more than one million have fled their homes since conflict erupted last April in the eastern regions of Donetsk and Luhansk.

Just three days ago, Mr Poroshenko accused the rebels of reluctance to withdraw heavy weapons under international supervision, in accordance with the terms of the ceasefire agreed in the Belarussian capital Minsk.

But on Monday he said: “Ukraine has withdrawn the lion’s share of its rocket and heavy artillery systems. The Russian-backed fighters have also withdrawn a significant amount.”

As for the truce itself, he said, “There is a ceasefire or there isn’t – it depends on how you look at it.”

Observers from the Organization for Security and Co-operation in Europe are monitoring the ceasefire agreed in Minsk, Belarus, on 12 February.

The two sides are due to create a buffer zone between them of at least 50km (30 miles) for artillery of 100mm calibre or more, 70km for multiple rocket systems and 140km for the heaviest rockets and missiles.

Self-propelled guns of the self-proclaimed People’s Republic of Donetsk stood parked in a hangar in Snizhne, some 90km (56 miles) east of Donetsk, on Saturday

The German Ambassador to the US, Peter Wittig, said Mr Obama had agreed to hold off during a White House meeting in February with German Chancellor Angela Merkel.

Mr Obama, he said, had concurred with Mrs Merkel that it was important to “give some space for those diplomatic, political efforts that were under way”.

In another development, Russian President Vladimir Putin admitted for the first time that the plan to annex Ukraine’s Crimea region last March was ordered weeks before the referendum on self-determination.

Mr Putin said on TV he had ordered work on “returning Crimea” to begin at an all-night meeting on 22 February. The meeting was called after Ukraine’s pro-Russian President, Viktor Yanukovych, was ousted from power in Kiev.