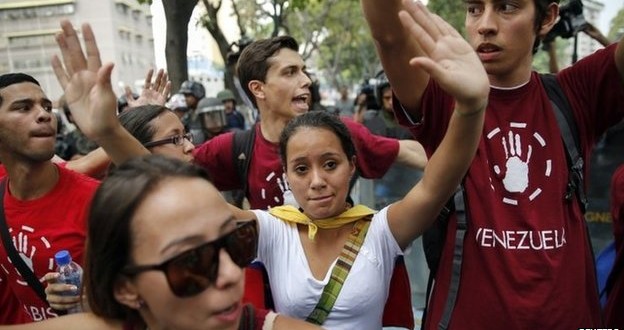 Fresh US sanctions on Venezuela

Opposition protests have continued amid an economic crisis in the country

The US has targeted at least seven Venezuelan officials with sanctions for alleged human rights violations.

Those named, including the head of police, will have assets frozen and be blocked from doing business with American firms or travelling to the US.

The White House said in a statement it was “deeply concerned” by the Venezuelan government’s efforts to intimidate political opponents.

Tensions between the US and Venezuela have been on the rise.

Last week, Venezuela gave the US two weeks to significantly cut its diplomatic mission in the country.

In the latest episode on Monday, the White House called on Venezuela to release all political prisoners, including “dozens of students” and warned against blaming Washington for its problems.

Spokesman Josh Earnest said the Venezuelan government had tried to distract from “its own actions by blaming the United States or other members of the international community for events inside Venezuela”.

As well as the actual sanctions against officials, what seems to be generating a lot of interest in Latin America is the fact that president Obama has declared a “national emergency” with regards to Venezuela.

In an executive order describing the sanctions, the US government says the situation in that South American country poses an “unusual and extraordinary threat to the national security and foreign policy of the United States”.

This strong language may be an indication that the US is becoming increasingly worried about the political and economic instability in Venezuela and how it could potentially affect the region more generally.

The US is particularly troubled by its diplomatic row with Caracas at a time when Washington has been trying to start a new relationship with Cuba and foster deeper ties with Latin America.

But the White House has tried to play down the effect of these words by saying that they are the “standard language” that it has used when it has decided to implement sanction programmes in 20 to 30 countries.

Ms Rodriguez told reporters that her country will insist on a relationship with the US that is “based on respect and sovereign equality”.

The South American country was hit by major protests last year in which dozens were killed and more than 3,000 arrested in a wave of anti-government sentiment.

Support for President Nicolas Maduro has dropped sharply amid an economic crisis marked by shortages and high inflation.

The White House argues the officials were instrumental in human rights violations, persecution of political opponents and significant public corruption.

One of those named is Antonio Jose Benavides Torres, the former director Venezuela’s Bolivarian National Guard’s, whom the US said “used force against peaceful protestors and journalists, including severe physical violence, sexual assault, and firearms”.