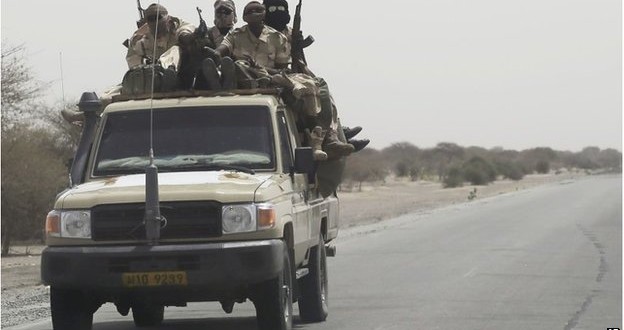 A regional force has recaptured the Nigerian town of Damasak a day after launching a major offensive against militant group Boko Haram, sources say.

The Islamist group had held the town near the Niger border since November, part of territory it had captured since stepping up attacks in the region.

Military sources say about 10 Chadian soldiers and 200 militants were killed.

The campaign to push back Boko Haram comes days after the group pledged allegiance to Islamist State (IS).

The militants have been fighting an insurgency to create an Islamic state in northern Nigeria since 2009, and in recent months the violence has increasingly spilled over into neighbouring states.

This has led Niger, Chad and Cameroon to send troops into Nigeria to help drive back the militants.

Chad’s army has not commented on the reported death of its soldiers.

“We have kicked the enemy out of these areas [around Damasak] and they are now under our control,” one Niger military source told the Reuters news agency.

A convoy of more than 200 vehicles has been seen heading from Niger into Nigeria, while air strikes have also been reported.

On Friday, the African Union endorsed the creation of a regional force of more than 8,000 troops to combat the group.

Colonel Sami Usman Kukasheka: “The military will definitely see to the end of the insurgency in Nigeria”

Nigeria postponed national elections by six weeks until 28 March in order to have more time to try to improve security in the north.

IS took control of large swathes of territory in eastern Syria and across northern and western Iraq last year.

It has forged links with other militant groups across North Africa and the Arabian Peninsula, and in January, militants in Afghanistan and Pakistan pledged their allegiance.

Jim Muir: “This makes them look more like a global franchise”

Nigerian officials dismissed Boko Haram’s announcement of links to IS as a “sign of weakness”.