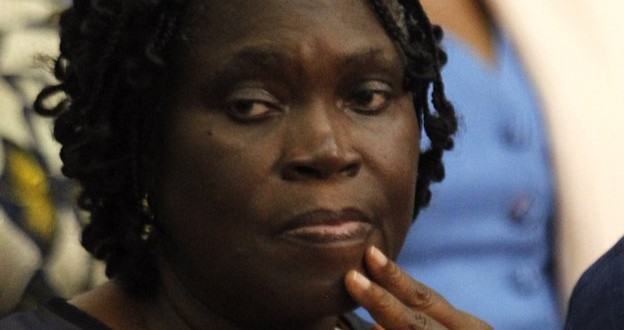 The Ivory Coast’s former first lady, Simone Gbagbo, was a powerful politician in her own right

Ivory Coast’s former first lady, Simone Gbagbo, has been sentenced to 20 years in jail for her role in the violence that followed the 2010 elections.

Gbagbo, 65, had been charged with undermining state security.

More than 3,000 people died in the violence that followed the presidential poll after the ex-leader refused to accept defeat to Alassane Ouattara.

She and her husband were arrested in 2011 after troops stormed a bunker where the pair had taken refuge in the main city, Abidjan.

Her husband, former Ivorian president Laurent Gbagbo, is awaiting trial at the ICC

More than 3,000 people died in the fighting that followed the disputed 2010 elections

And it was in the same city where Gbagbo – once called the “Iron Lady” – faced trial. She was also accused of disturbing public order and organising armed gangs.

The court “unanimously” condemned her to the jail term, according to AFP. Prosecutors had requested a lighter sentence.

Her daughter, Marie Antoinette Singleton, told the BBC the sentence was unjust.

“If we say that something wrong happened, it happened on both sides. Nobody looked into bringing all responsible parties to trial.”

Laurent Gbagbo, is facing four charges at the ICC in The Hague, including murder, rape and persecution.

The ICC had issued an arrest warrant for Simone Gbagbo too, but this was dismissed by the Ivorian government.