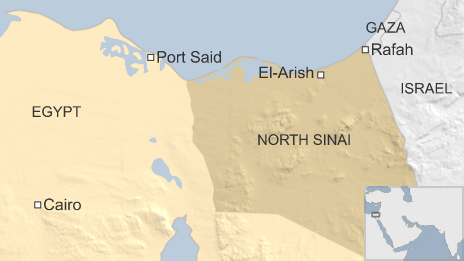 Bomber strikes police base in Sinai

The attack, on Tuesday morning, was near the provincial capital, al-Arish.

A long-running Islamist insurgency in the Sinai peninsula has increased since President Morsi’s overthrow in 2013.

Previous incidents have been blamed on the same group.

Formerly known as Ansar Beit al-Maqdis (Champions of Jerusalem), in November 2014 it pledged allegiance to Islamic State and changed its name to Sinai Province.

“The bomber drove a water tanker filled with explosives into the rear gate of the base,” a security official told AFP news agency.

“As the vehicle approached, police fired on it, detonating the explosives inside.”

Security sources who spoke to Reuters news agency said police action had prevented the bomber from entering the barracks, and that the civilian had been passing by chance when the attacker hit.

At least 30 people, mostly soldiers, were killed and dozens wounded in a series of attacks in the north of the province on 30 January.

The latest attack came ahead of a major conference in Sharm el-Sheikh aimed at attracting foreign investment to the region.